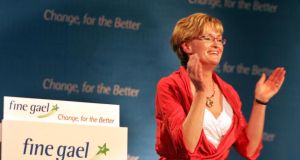 They were formally nominated at a special party convention at the Sheraton Hotel in Athlone this afternoon.

Ms McGuinness, who was recently appointed leader of the Fine Gael delegation in the European Parliament, told the convention that she had every confidence that Fine Gael could win two seats in the constituency in the elections on May 23rd.

“While European parliamentary affairs do not attract the same level of public attention as the proceedings of Dáil Éireann, the European Parliament is responsible for the vast majority of legislation that governs the daily lives of Irish citizens.”

“It is also the most democratic of all the EU institutions, being the only one directly elected by the people, and now, arising from the Lisbon Treaty, shares co-decision powers with the European Council of Ministers.”

The Labour Party is expected to confirm Emer Costello as its European parliament election candidate for the Dublin constituency later today.

She is the only candidate for Dublin being put forward for the party’s selection convention which is being held in Liberty Hall this afternoon.

Ms Costello is a former lord mayor of Dublin and succeeded Proinsias de Rossa as MEP for Dublin in February 2012.