Mayo profile: ‘People are in bad form, with no spare cash . . . and not saying a lot to us, which is dangerous’ 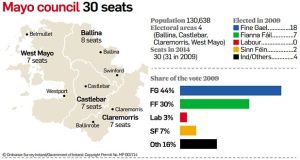 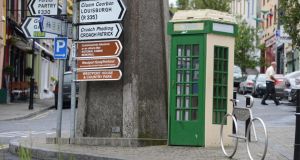 Even before the first salvoes were fired in this local election, Fine Gael lost a seat in the Taoiseach’s constituency.

Sitting councillor and Mayo football star Séamus Weir withdrew his name at last January’s selection convention in Ballina, and declared his intention to run as an Independent.

Cllr Weir, who won five county titles and a Connacht championship, is concerned about the impact of Eirgrid’s proposals to route pylons and overhead power lines as part of GridWest through Knockmore and the Moy Valley area.

Seven years ago, when he was made chair of the local authority, one of Weir’s six objectives was to initiate dialogue among all parties involved in the Corrib gas dispute, and he feels passionately that communities affected by the large energy projects moving into north Mayo - from wind to wave - should be listened to before big decisions are taken.

Meanwhile, loss of discretionary medical cards, water charges, property taxes and a lack of jobs are issues on doorsteps, according to some of the 61 candidates seeking 30 seats.

Mayo may be one of the largest constituencies geographically, but its six electoral areas are being reduced to four.

Fine Gael, which held the majority on the outgoing council with 16 seats (17 before Weir’s defection), is fielding 20 candidates, while Fianna Fáil, with seven seats currently, has 18 runners.

Minister of State Michael Ring, whose base is Westport, says, “People are in bad form, with no spare cash . . . and not saying a lot to us, which is dangerous.”

Sinn Féin is hoping to build on its existing two seats by fielding a candidate in each of the four electoral areas, while there are 16 Independents, compared to five elected in 2009, along with two Green Party candidates and one Labour.

Anti-government anger fuelled a high turnout among voters in Mayo during the last local election.

However, Fianna Fáil TD Dara Calleary says his party is getting a much better reception than in 2009 and 2011, and there is a perception that Mayo and the west of Ireland have been forgotten about.

Calleary and Independent councillor Michael Kilcoyne have been critical over the Taoiseach’s failure to do anything about tax-free status for Knock airport, similar to Shannon.

Fine Gael’s former Castlebar mayor Cyril Burke says he received “more slagging” than actual criticism about last week’s report that he was the “best paid local representative in Connacht”, with expenses of €121,872 over two years from 2012 to 2013.

Rural dwellers
Water charges are not much of an issue in his area, largely rural and south of Castlebar town, Burke says, as rural dwellers have been paying for water all long.

Threats to post offices and maternity services in Castlebar hospital, changes to LEADER funding, delays in repairing storm damage, the uncertainty over seaweed harvesting rights and restrictions on estuary fishing for salmon in Doohoma/Geesala are issues being picked up by smaller parties and Independents.

Erris-based Sinn Féin councillor Rose Conway-Walsh is expected to poll very well in the west Mayo electoral area, while her colleague to the east in Claremorris, Gerry Murray, is also regarded as strong.

A mini “civil war” in Westport over the Fine Gael nomination is splitting the vote there, mirroring what is happening to the party in Ballina.

Independents are expected to do very well in Mayo, but the cognoscenti say the number of nonparty first-preference votes may not match seats.