Mary McAleese: My devout Catholic son bullied for being gay

Former president of Ireland, Mary McAleese speaks to Mary Minihan about her catholic son bullied for being gay and the negative mail she recieved during the Same-sex Marriage Referendum campaign. 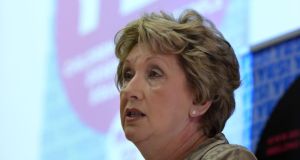 Former president of Ireland Mary McAleese speaking at a Belong To Yes event on “Why my family will be voting Yes” in the Same-sex Marriage Referendum at the Wood Quay conference centre, Dublin, on May 19th, 2015. Photograph: Dara Mac Dónaill/The Irish Times

Former president Mary McAleese has described her only son Justin as a devout young Catholic who was bullied and made to feel lonely because he was gay.

Growing up, Justin was a “willing and happy” altar boy and enthusiastic member of his local Catholic youth club, but he went through “torture” when he discovered what his Church taught about homosexuality.

“When our son came out to us at the age of 21, we at that stage were just broken for him that he, in a gay-friendly household, had not felt able to confide in us his loneliness, the bullying that he was exposed to,” she said.

Justin’s revelation about his sexuality was not a surprise to his mother, however.

“I often tell my son that I probably had known from the time he asked Santa Claus for a vacuum cleaner.

“I’m not joking because I remember saying to my mother then - we never know what kind of children we are rearing.”

In an interview with The Irish Times on Tuesday, Mrs McAleese revealed she had received negative mail during the Same-sex Marriage Referendum campaign.

“I’ve received some really rather disturbing post from people who purport to be Christians but do not write in very Christian terms, regrettably.”

However, she said she believed quite a number of people had yet to make up their minds how to vote on Friday.

She cited another experience from her family life with her husband Martin to demonstrate how staunchly held views can change over time.

“Martin’s father Charlie came to live with us, and he at first would have been your regular, bog standard, Irish Catholic granda with attitude to gay people.”

In the company of the gay men and women who visited the McAleese home, “he just blossomed and he let go of all of that bias and prejudice”, she said.

“We respected his views but at the same time we chatted and argued and debated enough that, over time, he changed his views.”

Mrs McAleese said she had spoken to other parents of gay children “coming from the mortuary” after their children had died by suicide.

Friends of hers had found out their children were gay the night the child had attempted suicide, or were attending the doctor with depression.

She said there was “a lot of homophobia still out there” but it was a “fading reality”.

The Catholic Church’s teaching on homosexuality made it “difficult but not impossible” to be a committed Catholic.

She praised the “phenomenal leadership” shown by a number of Church of Ireland bishops.

The thought of leaving the Catholic Church had come into her mind from time to time, but what had kept her from ever really seriously considering it was the “truly wonderful” late Archbishop Dermot Ryan.

“I detect that same openness in Francis, Pope Francis,” she said.

Mrs McAleese described as a “wonderful thing” Pope Francis’s establishment of a working group on the Church’s teaching on homosexuality that will report to the Vatican Synod in October.

“I’d like to think that maybe down the line it would change, but believe me, a Yes outcome in the referendum will not change Church teaching,” she said.

“These arguments are abstractions and distractions and they’re a good reason really why people should listen to the legal experts.”