Man tells Oireachtas committee he was paid ‘55 cent an hour’ 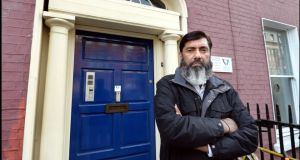 Muhammad Younis told the Oireachtas Committee on Jobs, Enterprise and Innovation that the Labour Court had awarded him €92,000 over breaches of his employment rights but he did not receive it as he was undocumented. Photograph: Brenda Fitzsimons/The Irish Times.

A man who came to Ireland from Pakistan in 2003 to work as a chef has told an Oireachtas committee he was paid 55 cents an hour for three years after he arrived and given just one day off per year.

As part of a discussion on the Employment Permit (Amendment) Act 2014, Muhammad Younis told the committee on jobs, enterprise and innovation, that the Labour Court had awarded him €92,000 over breaches of his employment rights.

Mr Younis, who gave a statement through a translator, received none of the sum from his former employer, the Poppadom restaurant chain, which he said had failed to renew his work permit meaning he became undocumented in the State.

“My employer took the Labour Court to the High Court and said he did not have to pay me because the contract of employment could not be recognised as I was undocumented,” he said, adding that he was appealing the decision to the Supreme Court.

When the appeal against the Labour Court ruling was upheld in the High Court, Mr Justice Gerard Hogan said an unforeseen consequence of the Employment Permits Act 2003 prevented undocumented workers from seeking redress under labour law as the employment contract cannot be recognised.

The Employment Permit (Amendment) Act 2014 contains a specific amendment, which notes to the Younis case, that seeks to close the loophole.

Mr Younis, who was addressing the committee along with members of the Migrant Rights Centre Ireland, said he was glad his case had exposed the loophole and that he hoped the Bill would allow undocumented workers to seek compensation orders for unpaid wages from the courts.

The Migrant Rights Centre Ireland has welcomed a number of the provisions set out in the Bill, describing plans to place a reactivation scheme for undocumented workers on a statutory footing as a positive step.

However, it is concerned at the section relating to the case of Mr Younis which says a foreign national without a work permit can only seek compensation through the civil courts if they have taken “all reasonable steps to ensure compliance” with the law.

“My fear is this does not go far enough,” Mr Younis said. “The Bill must ensure that all exploited undocumented workers can access the courts. This is the only way we will make sure no one else is treated like I was.”

Of his experience, Mr Younis told the committee: “For the first few years I was paid 55 cents an hour. I worked 77 hours a week and got no day off except Christmas day. I did not know many people as I stayed with my employer for most of the time.”

Sinn Féin TD Peadar Toibín said the exploitation of workers was a horrible thing but that the case of Mr Younis showed the current laws colluded with it.