Majority of FG Senators will oppose Kenny over Seanad

Senators will use personal votes to oppose Seanad abolition 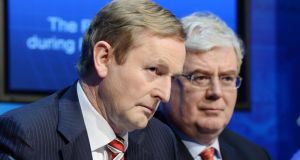 Taoiseach Enda Kenny and Tánaiste Eamon Gilmore: Fine Gael and Labour Senators have signalled intentions to vote No in the referendum to abolish the Seanad. Photograph: Alan Betson


A majority of Fine Gael’s 18 Senators and every one of Labour’s representatives in the Upper House say they intend to vote against the Government’s plans to abolish the Seanad in the October referendum.

The 29 Government Senators voted Yes on Tuesday to allowing a poll to take place on whether the Seanad should be abolished or retained.

But when they were contacted by The Irish Times yesterday and asked how they intended to vote on referendum day, more than half of Fine Gael Senators confirmed they would oppose Taoiseach Enda Kenny’s proposal that the Seanad be abolished.

Just one Fine Gael Senator, Michael D’Arcy from Wexford, said he would vote in favour of scrapping the Seanad.

Seanad leader Maurice Cummins of Fine Gael declined to state his position. “I’ll be casting my vote in the ballot box on the day,” he said. Cait Keane and Imelda Henry expressed similar sentiments, while Jim D’Arcy said he was undecided.

Previous comments from the Government chief whip in the Seanad Paul Coghlan indicate he is unlikely to support the referendum. The newest Senator, Hildegard Naughten, and Eamonn Coughlan also could not be reached for comment .

All 11 Labour Senators confirmed they would be voting No on Friday, October 4th.


‘Makes sense’
The deputy leader of the House and Labour whip Ivana Bacik said: “I think it makes sense that Senators will be voting in favour of retention.”

Susan O’Keeffe said she would listen to the Government’s arguments, but “if I was voting now today I’d vote No”.

Lorraine Higgins said the debate and other recent events in the Seanad had pushed her towards “voting to get rid of” the Upper House.