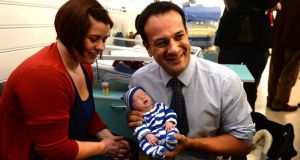 Mr Varadkar acknowledged that some countries had banned surrogacy but the Government had taken a view that it should be permitted in Ireland.

“But only on an altruistic basis, not as a commercial operation, not for money or for profit by anyone,” he said.

The Department of Health has been authorised to prepare legislation on assisted human reproduction and associated research, which will regulate surrogacy and related practices in Ireland for the first time.

Reimbursement of “reasonable expenses” to the surrogate, who agrees to carry and deliver a child on behalf of another individual or couple, will be permitted under the legislation.

Meanwhile, the use of stored sperm, eggs or embryos after a person’s death by their spouse or civil partner will be permitted if consent was given in advance.

Assisted human reproduction (AHR) services will be available to people irrespective of gender, marital status or sexual orientation, “subject to the welfare of any future children”.

However, IVF will not be publicly funded under the legislation.

A limit will be placed on the number of families to which sperm or eggs from the same donor can be donated.

Sex selection wil not be allowed. However, in cases where there is a high risk of serious genetic disease or impairment, it will be permitted for medical reasons subject to strict criteria.

The Supreme Court was recently critical of the continued lack of legislation on AHR and surrogacy and highlighted that it was the role of the Oireachtas to develop legislation in this area.

Mr Varadkar said he did not have any figures on the extent of commercial surrogacy in Ireland, “if there is any”.

He said he was sure it was the case that most people who availed of commercial surrogacy did so overseas, “but if there were to be any penalties it would apply to the middle men and the agents” rather than the parents. However, he said that was a matter for detailed legislation.

Mr Varadkar was speaking on Wednesday at the National Maternity Hospital on Dublin’s Holles Street, where he opened a new neonatal intensive care unit for premature babies.

Earlier, Mr Varadkar explained the new law would introduce a legal mechanism to allow for a “transfer of parentage” in cases of surrogacy if the adults involved agree that should happen.

Mr Varadkar said Cabinet had given him authority to prepare the outline of a Bill, which would take a few months. A full public consultation and Oireachtas committee hearings would follow.

“And that’s because it is a complicated area. There are lots of ethical and legal dilemmas. I don’t think anyone has a monopoly on wisdom when it comes to these issues and that’s why it’s important I think that we allow time.”

The legislation will not be in place before the General Election.