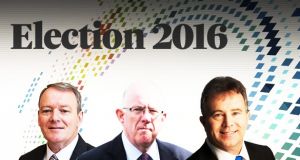 Fianna Fáil’s Seán Fleming topped the poll in Laois with one of the country’s largest quotas while re-elected Fine Gael TD Charlie Flanagan described Saturday as a “particularly black day” for his party.

As the first boxes were opened in the Portlaoise count centre it became clear that Fianna Fáil was in for a very good day in the constituency, which takes in parts of south Kildare, and completed tallies confirmed that Mr Fleming would gain election with a sizeable surplus.

The final total of 13,626 first preference votes exceeded even the most optimistic expectations of Fianna Fáil activists, and he was duly hoisted aloft to a rousing rendition of ‘Happy Birthday’ on the day he turned 58.

“It’s a big change from the last time when I got the last seat without reaching the quota,” said Mr Fleming.He indicated that Fine Gael’s use of the term ‘recovery’ as part of their electioneering was integral to their downfall nationally.

“That message was arrogant. Fianna Fáil have been on the ground with ordinary people, and I think the people have responded to our message of fairness- not just tax cuts for the wealthy,” he said.

It was a long day for Fine Gael’s outgoing Minister for Foreign Affairs Charlie Flanagan, given that the count wrapped up at 7pm, as he claimed the third of three seats without a quota behind Sinn Féin’s incumbent TD Brian Stanley.

“I’m very pleased with our performance here in Laois where we bucked the national trend to come in with in excess of 32 per cent in a day that has been a particularly black day for Fine Gael nationally,” he told The Irish Times.

“Our strategy of running two candidates here in Laois paid off. However, the national result is gravely disappointing,” he added. Mr Flanagan declined to discuss coalition prospects given that the overall results were not yet apparent.

His running mate Thomasina Connell put in a respectable performance with 4,233 first preference votes but was never really in contention. She was trailed on the first count by Labour Senator John Whelan on 2,856, with Green Party candidate Sinead Moore coming last.

Sinn Féin’s Brian Stanley said his victory came as part of an historic day generally for the party, and added that a good showing by the area’s “left, republican base” was fitting in the county where the first shots of the Easter Rising were fired a century ago.

“It’s historic, what we’ve done here today is we’ve consolidated our position as the party of the left in this area and expanded the left vote.

“We are coming up to the 100th anniversary of 1916, the first shots of the Rising were fired here in 1916 so for us to be able to expand the left, republican base in it… we’re very happy with that,” he said.

Part of a five seat constituency spread over two counties in 2011, Laois gained autonomy for this election and was regarded by many as being among the most predictable of the 40 constituencies given the perceived strength of the three winning candidates.

Laois had the smallest number of candidates running for election anywhere across the country with a seat on offer between every two people running. There were notably no Independents in the contest.

Laois was part of the old Laois-Offaly constituency, which was once a jewel in the Fianna Fáil crown as it regularly returned three party seats. The high point was in 2007 when former taoiseach Brian Cowen secured more than 19,000 first preferences.

All that changed in the last election, when the Fianna Fáil vote fell by 30 per cent. But the party managed to secure two seats, Brian Cowen’s brother Barry, in Offaly, and outgoing TD Sean Fleming, in Laois.

Labour’s John Whelan, from Laois, later elected to the Seanad, ran for Labour in his first electoral outing. Labour once held a seat in the old Laois-Offaly constituency until 1957 and again from 1965 to 1969, by which time Fianna Fáil and Fine Gael were consolidating their grip on the vote.

The political landscape has changed much from those days, but a strong performance by Whelan signalled a Labour resurgence in 2011.

This new constituency represented one of the major changes in the 2012 revision. The county is a constituency in its own right for the first time in the State’s history due to a significant increase in population. Over the years, Laois has become commuter land, with many people working in Dublin moving there because of the escalating house prices in the capital.

A small part of Kildare South was added to give it the required population for a three-seater.

What should you do if you think you might have coronavirus? 19:58
Coronavirus: One case confirmed in Northern Ireland 19:56
Predictions of ‘skin and hair flying’ as FG selects 13 of up to 60 Seanad hopefuls 19:14
Legal challenge to Shannon LNG project has EU implications 19:04
German human rights lawyer brings case against Google Ireland 18:56