Labour TD confirms he will not contest next general election 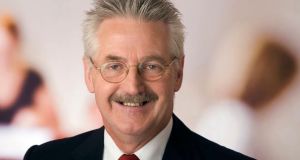 Michael Conaghan: “The council is where you get local things done: parks, swimming pools and so on. The Dáil compared to that is very disappointing.”

A Dublin-based Labour backbencher has said he will not attempt to contest the upcoming general election. Dublin South Central TD Michael Conaghan (70) took the second of two Labour seats in the constituency in 2011. “I’m not a candidate in the next election. I’m delighted people in the area supported me in local elections for so long. I told my wife if I ever got elected to the Dáil, I’d only do one term,” Mr Conaghan said.

Labour is due to hold its Dublin South Central selection convention soon. Sitting TD Eric Byrne and Crumlin/Kimmage councillor Rebecca Moynihan have put their names forward, but Ms Moynihan may not contest the convention as party headquarters are understood to have requested a one-candidate strategy.

Dublin South Central is changing from a five-seat to a four-seat constituency at the next election. Mr Conaghan, who was lord mayor of Dublin in 2004, said he had found his time as a backbencher in the Dáil to be a disappointing experience. A former teacher, he was elected to Dublin City Council in 1991, 2004 and 2009.

“The council is where you get local things done: parks, swimming pools and so on. The Dáil compared to that is very disappointing. You don’t get involved in community delivery. Unless you think you have some gift to give to legislation, it’s not a very exciting place. It’s not a very satisfying place from the point of view of getting things done.”

However, Mr Conaghan, who is originally from Donegal, said he did enjoy his work on Oireachtas committees. “You can sit down with people from different parties and agree on things rather than arguing. People leave their party politics at the door and common sense and good ideas take over. You are working towards real objectives.

“There are high levels of satisfaction in the council because you go up the road and you see the park or the trees, or the potholes that are no longer there. There’s none of that in the Dáil. The chamber is very disappointing. There’s so many backbenchers, you might be waiting six weeks to get speaking on something. It’s not really designed for participative activity. I know if you’re a minister, it’s different, but not for an ordinary backbencher.”