Labour leadership down to Burton and White

Campaign begins with each candidate getting list of the 5,000 party members 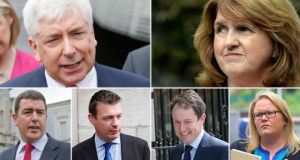 The battle for Labour Party leader is between (top) Alex White and Joan Burton, while the deputy leadership race will be contested by (below from left), Michael McCarthy, Alan Kelly, Seán Sherlock and Ciara Conway.

The nomination process for those seeking to become Labour Party leader closed at noon today, with Minister for Social Protection Joan Burton and Minister of State for Primary Care Alex White the only candidates to succeed Eamon Gilmore.

The four contenders for the deputy leadership are also now known – with Ministers of State Sean Sherlock and Alan Kelly, joined in the race by TDs Ciara Conway and Michael McCarthy.

Party general secretary Ita McAuliffe will now meet the candidates and their agents to explain the procedure to be followed in the leadership elections.

The entire paid-up membership of the party will vote to elect the new leader and deputy leader. Each candidate will get a list of the 5,000 or so party members and their contact details, and the campaign will begin.

It is expected that four hustings will be arranged at which the candidates can address party members seeking their support. Dublin, Cork, Galway and Portlaoise, where the Tom Johnson Summer School is being held, are the provisional locations for the husting.

Members who are not more than two years in arrears will be entitled to vote if they pay up their €15 a year membership fee before June 13th.

An appeals panel will be established to consider the claims of members who feel they have been unfairly treated.

The closing date for the return of ballot papers will be noon on July 4th. The counting of votes will begin immediately.

Joan Burton: The Dublin West TD is the favourite, and was quick out of the traps, canvassing backbenchers for support almost immediately after Eamon Gilmore announced his resignation.

Ms Burton has worked the grassroots assiduously in the past three years. She is also the most popular Minister among members of the public.

Her main strength is among the rank-and-file members. Her support in the parliamentary party would not have been huge to begin with, but appears to be growing.

Ms Burton has consistently said Labour should be the party of work, rather than a party of welfare. She will also emphasise the need for Labour to refocus on its strengths in the public sector and with the working class.

Her supporters will also point to her appeal to the average voter.

TDs could be persuaded she will be the most acceptable face to have on posters come the election.

Alex White: The 55-year-old barrister and former producer of The Gay Byrne Show has impressed a cohort of colleagues, who would like to see a media-savvy performer as party leader.

The Dublin South deputy is undoubtedly persuasive and highly intelligent, but doubts remain as to whether he could encourage enough ordinary members of the party to back him in a contest with longer-serving competitors.

Perceived as a liberal-leaning lawyer, some colleagues outside the capital suggest he might struggle to extend his appeal beyond a Dublin-centric, middle class niche.

His expertise as a legislator came to the fore during the fraught abortion debate. A first-time TD who had served a term as a senator, Mr White’s accomplishments were recognised when he was promoted to Minister of State for Primary Care in 2012 following Róisín Shortall’s departure.

Alan Kelly: The Minister of State at the Department of Transport has focused on securing the position of deputy leader and the expected full Cabinet post that would probably come with it.

If Joan Burton were to become leader, Alan Kelly could position himself as a male, young and rural counterbalance to her. He could gather support from a combination of those arguing for a generational change and those pushing for a rural presence at the top of the party. Kelly is based in Nenagh, Co Tipperary, but would not command wide backing in the parliamentary party. Expect Mr Kelly to emphasise his youth to play on those who want to see the rainbow coalition generation pass the baton, as well as a desire for renewal and regeneration of Labour.

His backers hope he would get support in the rural strongholds of Willie Penrose, Jack Wall and Emmet Stagg, but he won’t be alone in hoping for support from those quarters.

Ciara Conway: The 33-year-old Waterford TD is aspiring to become deputy to Alex White. Elected to the Dáil at her first attempt in 2011, Ms Conway previously worked for the children’s charity Barnardos.

She became interested in politics as a student at NUI Galway where she was elected to the Students’ Union and joined Labour. She was involved in Labour Youth as its international officer. She has a masters in social work from UCC.

Ms Conway was elected to Dungarvan Town Council in 2009. She was vocal on behalf of the party during the formulation of abortion legislation, and has pro-choice views. Seán Sherlock: The Minister of State for Research and Innovation is 41. Representing Cork East since 2007, Mr Sherlock is a son of the well-known former TD Joe Sherlock.

Educated at the College of Commerce, Cork and NUI Galway, he was co-opted to Cork County Council and Mallow Town Council in 2003 and was elected to both the following year. He is a former mayor of Mallow.

He was Labour’s spokesman on agriculture in the last Dáil. Michael McCarthy: Another Corkman, 37-year-old Mr McCarthy represents Cork South-West. From Bantry, Mr McCarthy was formerly a pharmaceutical company employee.

A first-time TD, he was elected to the Seanad in 2002 and re-elected in 2007 after contesting General Elections unsuccessfully in both years.

He was elected to Cork County Council for Skibbereen electoral area in 1999.