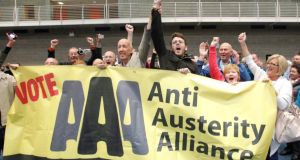 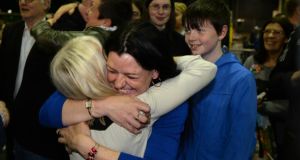 Sonya Stapleton of People Before Profit in the RDS yesterday after she was elected to Dublin City Council. Photograph: Dara Mac Dónaill 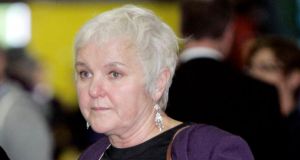 The remarkable thing about the local election results across the four Dublin authorities is the rise of the left and hard left as the Labour Party collapsed.

As well as the Sinn Féin rise, the hard left has seen its share of votes and seats increase across local authorities in the capital.

A clear illustration of this is the fact that the hard left, comprising People Before Profit, the Anti Austerity Alliance/ Socialist Party and Worker’s Party, polled about 8 per cent in Dún Laoghaire, and about 11 per cent in the other three councils in the capital.

This is without the Sinn Féin effect factored in and the huge gains the party made across the capital.

The combined vote of Sinn Féin, a few Greens and Independents – most of whom are left wing, with an estimated third on the hard left – comes in over 50 per cent.

Not only do you have the rise of the left, but you now have competition on the hard left too, with Labour largely stranded.

Sinn Féin had previously performed poorly in areas that would have been seen as Socialist Party strongholds, albeit ones which had a Labour presence also, yet there were numerous stories on Saturday of Sinn Féin candidates with two to three quotas in these areas. West Dublin An example of this is the Mulhuddart ward in west Dublin, Joe Higgins territory, and where Ruth Coppinger, now a TD for Dublin West, was standing for Fingal County Council, along with others.

The quota in the electoral area was 1,305, and the leading Sinn Féin candidate, Paul Donnelly, who also stood in the byelection, topped the poll with 3,201.

Through tight vote management, 1,023 of Donnelly’s 1,896 surplus went to his running mate Edmond Lukusa, who was hauled over on the second count, despite only getting 353 first preferences.

Coppinger, who will be replaced with a co-opted councillor, brought in a running mate too, and left Independent Lorna Nolan also took a place on the council in the eight-seat constituency. How will this strength translate into the council chamber?

It is probably unrealistic for Sinn Féin not to go into a ruling coalition on Dublin City Council, since it won 16 seats, almost a quarter of those on offer.

Yet the strength of the left, which is still widely fractured, will make forming coalitions on Dublin councils very difficult. Fianna Fáil, Fine Gael and Labour would control a majority between them in Dún Laoghaire, if current positions hold. They may also hold the upper hand in Fingal but it is unlikely they will form such a troika in any Dublin areas. Power balance The power balance is a different matter in South Dublin and Dublin City, where Sinn Féin and Independents, both left and right, are in command.

Bríd Smith of People Before Profit, who went up against the Socialist Party’s Murphy for a Dublin European seat, arguably splitting that vote, called for more co-operation on the left in the days before the election.

If Sinn Féin and other shades of the left want to run councils, they will have to heed Smith’s call.