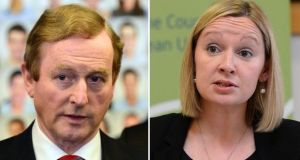 Taoiseach Enda Kenny has called for calm in the increasingly fractious debate over imminent abortion legislation. The issue has led to tensions within Fine Gael with Minister of State Affairs Lucinda Creighton the most prominent opponent of the plan to legislate for suicide.

Taoiseach Enda Kenny has appealed for calm in the increasingly fractious debate over imminent abortion legislation, saying people should wait until the draft law is published before passing judgment on it.

Mr Kenny’s remarks yesterday evening in Granada, Spain, came as opposition to the legislation within Fine Gael hardened after the publication of secretly taped private conservations on the topic with two Labour TDs.

Although a number of Fine Gael TDs who had opposed the inclusion of a suicide threat as grounds for abortion in the legislation have had their fears heightened by the disclosures, the Taoiseach said the new laws would be entirely within the Constitution and would not import any new rights into existing law.


Heads of Bill
Government sources indicated last night there was broad agreement on the heads of the Protection of Maternal Life Bill 2013. Under the terms of the legislation, one doctor will be able to make a decision on whether to terminate a pregnancy in an emergency situation in which a mother’s life is in danger. Where there is a threat from a medical condition such as cancer, two doctors, an obstetrician and the relevant consultant will be entitled to make the decision.

In the case of a threatened suicide there is still no agreement on the number of doctors required to make a decision but Labour sources say they are hopeful agreement can be reached on a scheme that will not involve six doctors, which has featured in much of the media coverage .

After talks with Spanish prime minister Mariano Rajoy, the Taoiseach said the Cabinet would return to the draft legislation tomorrow but did not say whether he expected the matter would be settled at its weekly meeting.

“I think that people should wait until they have the explanatory memorandum and the heads of the Bill before they decide to comment on what’s actually in it,” Mr Kenny said.

His comments came after the Sunday Independent published transcripts of conversations taped surreptitiously by a pro-life activist in which Labour TDs Aodhán Ó Ríordán and Anne Ferris expressed support for further liberalisation of the abortion law.

Minister of State for European Affairs Lucinda Creighton, the most prominent Fine Gael opponent of the plan to legislate for suicide, said the disclosure was worrying. “It is a matter of concern if that is the intent of the Labour Party,” she said.

Galway West Fine Gael TD Brian Walsh expressed disquiet at the views expressed in the taped conversations: “It is clearly the case that legislation providing for abortion in the case of suicidal ideation is seen as a stepping stone to abortion on demand by Sinn Féin, Deputy Clare Daly and some Labour TDs quoted in the Sunday Independent .”

Mr Walsh said he fully supported the Taoiseach and the Government but he would be failing in his responsibility if he knowingly participated in the enactment of legislation that was fundamentally flawed.


Legal certainty
Other Fine Gael TDs, including John Deasy, Peter Matthews, Michelle Mulherin and James Bannon have expressed opposition to the inclusion of the suicide option.

Wicklow Labour TD Anne Ferris, whose taped conversation with a woman at her constituency clinic was printed yesterday, told The Irish Times that she had never made any secret of her view that at some stage in the future she would like to see the abortion legislation widened.

“I am disappointed that somebody would betray my trust in the way that woman did but I am disgusted with Independent Newspapers,” she said.