Kelly wanted housing opening put off until he could attend

Minister for the Environment rejects criticism, saying ‘there’s a bit of politics going on’ 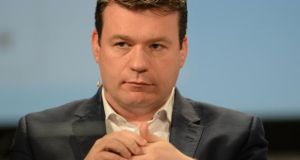 Minister for the Environment Alan Kelly: “It’s not a big issue as far as I’m concerned”. Photograph: Cyril Byrne

Minister for the Environment Alan Kelly has dismissed criticism from Fianna Fáil after he asked a local authority to postpone the official opening of a Cork social housing project until he could attend.

Mr Martin said an invitation to attend the latest phase of the multi-million euro Glen regeneration housing project on the northside of Cork City had been sent to Mr Kelly’s office.

“A reply came back stating to postpone it until the Minister was available. Following that an email went to all local authorities requesting that no openings or announcements of any future projects would be done until such time as they were cleared by the Minister’s office,” Mr Martin said.

However, Mr Kelly said there was “a bit of politics going on”.

Asked if he or his office had written to the chief executives of all local authorities requesting more advance notice of the opening of all social housing projects, Mr Kelly said there was a “normal process” of communication with local authorities.

“No it’s very simple. Customary practice here across not just this Department but most other Departments is where projects are funded that the local authorities...would notify the Department and work towards dates for launches or announcements it that is possible,” he said.

“It’s not a big issue as far as I’m concerned but I think if you dig down into this there’s a bit of politics going on here.”

Mr Kelly said the latest phase of Glen development was a “pretty significant project”. The official opening is scheduled to take place on Friday, which is the final day of the mayoralty of Fianna Fáil’s Mary Shields.

“I think you’ll find that when mayors are coming to the end of their terms they are quite anxious to ensure that they open projects,” Mr Kelly said. “There’s a normal process all the time through our department of communication with local authorities.”