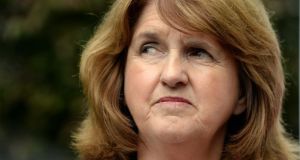 “Today I am declaring my candidacy for the leadership of the Labour Party. I would like to thank my proposer Deputy Ann Phelan and my seconder Deputy Eamonn Moloney as well as colleagues and supporters from the whole Labour family who are with me here today.

I would particularly like to thank Eamon Gilmore for his unstinting service and commitment to both the party and the country, and to state my respect for the dignified manner in which he has ensured stability of Government while his successor is elected.

Last weekend was an extremely difficult one for Labour. The voters are unhappy with our performance in Government.

People are not yet feeling the economic recovery that has just begun - in their personal lives, their families and their communities.

Too many people are still hurting six years after the worst economic crash in our country’s history.

We have fallen short in giving our society the care and repair it so badly needs.

I believe that people acknowledge the work that Labour has done in Government to restore financial stability and ensure that the economy as a whole recovers.

But people want to know when their own finances will repair and start to grow again and when their communities will recover.

That is why it is essential that the next step of Ireland’s journey is to build a social and economic recovery – from the middle out, rather than the top down.

A recovery that gets more people back to work, that raises living standards, that builds affordable and social housing and new schools and invests in health.

I said last year that we have reached the limits of austerity as the main tool of economic policy. That view is now held generally both here and internationally. Last night, the Governor of the Bank of England remarked that prosperity requires investment in social capital to row back on the extremes of inequality that blight modern societies.

We have concentrated on economic repair up to now. Now is time for an equal emphasis on social repair. Global bodies such as the IMF now recognise this and I am confident that we can command wide support throughout Europe for policies that emphasise social as much as economic repair.

I am equally confident that our Government partners recognise this and I am determined to work together with them to ensure that the recovery is shared fairly and felt in people’s daily lives.

I want to lead the Labour Party to its own recovery as an equal and active partner for the full remaining term of this Government and to secure enough representation in the subsequent general election to enable us to form part of the next Government.

I am a longstanding and proud Labour Party member, and I know that core Labour values will be the foundation stones of the social recovery.

Core values such as freedom – freedom from poverty, homelessness and unemployment. And that no person should be victimised because of their class, colour, creed, or sexual orientation.

Core values such as equality – ensuring that a renewed prosperity is shared by all, rather than subsidising the rich. And to ensure equal rights from the workplace to the wedding ceremony.

Core values such as community – that together, we are stronger than the sum of our parts. And through communities, clubs and unions, the power of the collective protects the rights of the individual.

These are Labour’s values, these are my values, and these are the values I believe are essential to building a true social and economic recovery in Ireland.

I want to drive that recovery, and that is why I want to be the leader of the Labour Party. “

Lobby to press politicians over referendum on right to home 00:05
FG and FF back transition payment for those retired before qualifying for State pension 23:57
Irish Times poll: Large majority want change of government 23:33
Animal welfare group raises concern over live exports 22:25
Two men questioned about attack where man was set on fire 22:01
SUBSCRIBER ONLY