It’s the little things that lead to resignations

Opinion: Why do some big issues get scant attention? 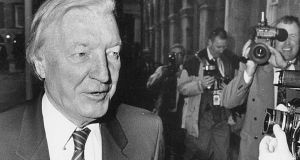 ‘Charlie Haughey was also forced to resign as taoiseach, not over the policies which he enacted from 1987 that devastated the health and education services but over whether he knew in 1982 of the tapping for a few weeks of the phones of journalists.’ Photograph: Frank Miller

Once again we have a political crisis about something that hardly matters, while issues that certainly matter remain ignored.

That a Garda Commissioner should feel obliged to resign because of a controversy over his characterisation of whistleblowers’ whistleblowing as “disgusting”, rather than over the alleged racial profiling of infant members of the Traveller community by gardaí on the Garda Pulse system, makes the point. That an arrogant Minister should be under pressure because of his stubborn vanity, rather than the entire Cabinet being under pressure because of the manner in which it has ravaged hundreds of thousands of lives by the political choices it has made, re-enforces the point.

Twenty years ago Albert Reynolds was forced to resign because of the appointment of Harry Whelehan as president of the High Court, while there was no controversy at all over the Maastricht treaty, which Reynolds signed and then urged the rest of us to endorse – a treaty that fatally undermined our sovereignty and propelled us towards the current financial crisis.

Two years earlier Charlie Haughey was also forced to resign as taoiseach, not over the policies he enacted from 1987 that devastated the health and education services but over whether he had known in 1982 of the tapping for a few weeks of the phones of journalists. Bertie Ahern was also required to resign as taoiseach because of supposed “dig-outs” he got in 1992, not over the policies that brought ruination to this society.


Four big issues
The “big” issues in our politics hardly get any attention. I identify four of these: the deepening inadequacy of our democracy and the diminution of sovereignty; sexual crime; inequality; and Denis O’Brien’s media and corporate power.

Representative democracy is not government by the people. It is democracy subcontracted to a political class, with the people as mere spectators, aside from a periodic opportunity to exercise a feeble sovereignty via general elections.

The scale of the diminution of our sovereignty by the relentless encroachment upon it by the institutions of the European Union is hardly acknowledged. Not alone now does Europe control our economic and monetary policies; the working conditions of employees; and the role, function and scope of State agencies but it controls the very nature of our society by the imposition a politics that prioritises private property rights, free markets and free trade (neoliberalism). A recipe that inevitably ordains a deepening of inequality, with all its perniciousness.


Sexual abuse survey
Among the most prevalent forms of criminality is child sex abuse. The Sexual Abuse and Violence in Ireland survey of 2002 showed:

One in six men (16.2 per cent) reported experiencing contact sexual abuse in childhood and one in every six cases of contact abuse (2.7 per cent of all boys) involved penetrative sex. That is about 60,000 boys raped.

These figures have been around for 12 years and there has been no proportionate policy response by any government, including this one. And the Government refuses to fund a follow-up survey.

Then there is equality.

As I was writing an earlier draft of this column I came across an email of a few days ago from the Catholic Communications Office informing me of the liturgy for the funeral last Monday of Eddie Haughey, aka Lord Ballyedmond.

What is the media organ of the Irish Catholic bishops doing sending out emails on the funereal liturgy of Eddie Haughey, other than in episcopal deference to his status as a member of the House of Lords or perhaps to the extraordinary wealth he accumulated from humble beginnings in Newry?

I have no wish to be disrespectful to Eddie Haughey, whom I liked and with whom I had a few hilarious encounters many years ago, but when last did the Catholic Communications Office send an email about the funeral of a deceased “ordinary” member of its church? Could there be a more brazen example of a mindset that some people are more important and matter more than others?

It is the mindset of the Irish Catholic bishops but, alas, a mindset that is far more prevalent throughout society. A mindset that wilfully ignores the stark reality that inequality causes the premature death of more than 5,000 people in this a society annually .

Finally, Denis O’Brien, to which I shall return.