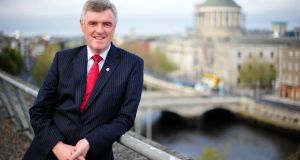 Irish Water was quick to accept the invitation to appear before an Oireachtas committee tomorrow to explain itself and answer questions about the €50 million it spent on consultancy fees in its first year of operation.

The speed of its response indicated the seriousness with which it is taking the controversy. The company is clearly aware that it needs political and public support this year as it begins water metering in earnest.

Although the first bills with not drop through letterboxes until this time next year, they will be backdated to October 2014.

Water charges are likely to be one of the main political issues of the coming months, and any missteps from Irish Water will be met with howls of political and public outcry.

Chief executive John Tierney’s interview with Sean O’Rourke on RTÉ Radio last week has caused a rocky start, but Mr Tierney will have an opportunity to steady things at the Oireachtas environment committee.

Here are some key questions Mr Tierney is likely to face, and which he should deal with adequately.

What is the detailed breakdown of the €50 million consultancy spend?

Irish Water must deal with this issue satisfactorily or else there is little point in it turning up at the committee at all. It has previously said it is prevented from providing a breakdown for commercial reasons, but that excuse will not find any purchase with TDs. It is likely to be one of the first questions to be asked, and simply must be answered.

What service did each company provide?

How come it took an RTE interview for the information to be disclosed?

If there is one thing TDs like less than being refused information by State bodies, it is having to look on while the media steals their thunder. The issue of Irish Water’s consultancy fees has been doing the rounds for a few months, and repeated parliamentary questions yielded no answers. It took a question from Seán O’Rourke to draw the information from Mr Tierney. Expect the Irish Water chief executive to be asked why TDs couldn’t get the same answer.

Who knew about the spending, and what level of detail did they know?

Irish Water has said it submitted its costings to the Department of the Environment, which then passed it on to the Commission for Energy Regulation (CER). CER gave an initial view that the spending by Irish Water was value for money and would provide savings in the longer term. A spokesman for Minister for the Environment Phil Hogan said Mr Hogan knew of the “ballpark” figures but was not aware of the minutiae. Fergus O’Dowd, the junior minister in the Department of the Environment, says he first heard about the €50 million on the radio.

Who sanctioned the consultancy spend?

As sure as a night follows day, the next question will be who signed off on the payments to companies like Accenture and IBM, and whether they felt it represented good value for money.

Did the Cabinet know what was going on?

It is highly unlikely the information went much further than the Department of the Environment, but TDs will probably try and tease out if other ministers knew what was going on, and if they raised any objections or concerns.

Why didn’t Irish Water simply live within the resources of Bord Gáis, its parent company?

An internal Department of Environment document reported on by RTÉ’s This Week programme suggests spending on external consultants was never envisaged. The document said Bord Gáis “will support the establishment and operation of Irish Water through leveraging existing operational capacity in areas such as asset management, capital programme delivery, networks management, customer service and billing, finance, IT”.

Irish Water is likely to argue it always needed external help to help it fully utilise the Bord Gáis resources available to it.

Why were so many former employees of local authorities recruited to senior positions in Irish Water?

Mr Tierney, a former Dublin city manager, was asked this question by O’Rourke. He was asked if the recruitment of staff and management at the company was too “insiderish”, with over half the nine-person management team coming from local authorities and the sponsoring Government department. Mr Tierney denied there was a “golden circle” but that probably won’t stop TDs asking similar questions.

Will there be more spending by Irish Water on consultants?

Given the level of controversy surrounding the €50 million, Mr Tierney is likely to be asked if he can give a commitment that Irish Water will ease up on hiring consultants, or stop doing so entirely. Expect him to say the initial costs were always going to be the highest, but consultants are likely to be used in future.