Senior managers can earn 19% top-up on their salaries 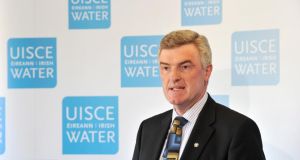 Irish water has defended its bonus payment scheme after it emerged that some senior managers at the company can earn a 19 per cent top-up on their salary .

The company’s wage structure includes a performance-related payment for staff and those rated “need improvement” are still entitled to a bonus of between 1.5 per cent and 9 per cent of their salary, depending on grade.

Senior management whose work “far exceeds expectations” will receive a 19 per cent bonus.

Those whose work “meets expectations” are entitled to a bonus of between 2.75 per cent and 14 per cent, and where performance “exceeds expectations”, the bonus will be between 4 per cent and 17 per cent depending on grade. The rewards model used is the same as the one at Irish Water’s parent company, Ervia, formerly Bord Gáis.

The charge will be applied once a household has used up its entitlement to one free leak repair service from the utility company under the First Fix Scheme. But if a customer wishes to have a leak repaired on their property before January next year, a private plumber will have to be called out and paid for and there is no mechanism for reimbursement.

In a statement issued last night, Irish Water said their pay model would result in “a performance driven organisation culture, consistent with best practice for commercial utilities” and would save the company €34 million over four years.

A percentage of salary is “at risk” for each employee and full salary can only be achieved if performance targets are met, the statement said. It also said a 19 per cent bonus could only be achieved in “exceptional cases and entirely at the discretion of the company”.

Dissatisfaction with the company’s communication management in particular has grown among Government members and Irish Water continues to be top of the agenda at both Fine Gael and Labour parliamentary party meetings, with some deputies calling for an overhaul of top management.

Minister of State at the Department of Justice Aodhán O’Riordáin said yesterday there was a “huge amount of dissatisfaction with communication”, which was “at best unfortunate and at worst very poorly managed”.

“We knew very early on communication of water charges was going to be absolutely key and unfortunately everything we had hoped wouldn’t happen with communication has happened,” he said.

A spokesman for environment Minister Alan Kelly, said the Government asked Irish Water to come up with a plan to improve its communication.