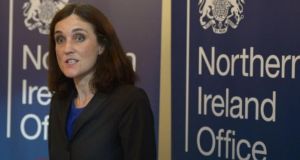 Northern Ireland secretary Theresa Villiers has told the House of Commons the Provisional IRA’s army council still exists but has ‘a wholly political focus’ and is not involved in directing terrorist activity.

Northern Ireland secretary Theresa Villiers has told the House of Commons that, although the Provisional IRA’s army council still exists, it has “a wholly political focus” and is not involved in directing terrorist activity.

Introducing an official assessment of paramilitary groups in Northern Ireland commissioned by the British government following the murder of Kevin McGuigan, Ms Villiers said it concluded the IRA was no longer recruiting or procuring weapons.

“The PIRA of the Troubles era is well beyond recall. It is our firm assessment that PIRA’s leadership remains committed to the peace process and its aim of achieving a united Ireland by political means. The group is not involved in targeting or conducting terrorist attacks against the state,” she said.

The eight-page assessment, which covered the activity of loyalist paramilitaries and dissident republican groups as well as that of the IRA, was compiled by the Police Service of Northern Ireland and MI5 and reviewed by an independent panel.

The Northern Ireland Secretary noted that, despite the decommissioning of weapons that took place between 2001 and 2005, the IRA still had access to weapons.

And she said that individual IRA members “remain involved in criminal activity, such as large scale smuggling, and there have been isolated incidents of violence, including murders”.

Responding to questions from MPs, however, Ms Villiers said there was no evidence that the proceeds of criminal activity conducted by IRA members was used to fund the political activities of Sinn Féin.

The Democratic Unionist Party’s (DUP) leader at Westminster, Nigel Dodds, said the continuing existence of the IRA was “totally unacceptable” and that all its members’ criminal activities must be stopped.

“Whilst the report says it is committed to the peace process and recognises the lack of recruitment, procurement and weapons and so on, nevertheless it clearly sets out the continuing existence of paramilitary structures, indeed that applies to all the organisations looked at, and illegal activity by members of the IRA. This is totally unacceptable and it is beyond high time that it was ended in all its forms - terrorism and criminality,” he said.

Ulster Unionist MP Tom Eliot focused on the report’s conclusion that the Provisional IRA’s army council was responsible for the overarching political strategy of both the IRA and Sinn Féin.

Ms Villiers replied that she could not speak for Sinn Fein. But her predecessor Owen Patterson, now a Conservative backbencher, said “we cannot have a normal political process in Northern Ireland while there are those who indulge in political activity, have links to shadowy organisations which might either go to the grotesque end of the murder of Kevin McGuigan or indulge in money raising activity which is wholly illegal - racketeering, money laundering and fuel smuggling”.

The Northern Ireland secretary said she was confident the report would help to resolve the impasse at Stormont and she suggested that a new independent body to monitor paramilitary activity, similar to the Independent Monitoring Commission that issued its last report in 2011, could form part of the solution.

“Working with the main political parties and society more broadly we need a strategy to lead us to the point where these organisations no longer exist and their influence is removed from Northern Ireland once and for all,” she said.