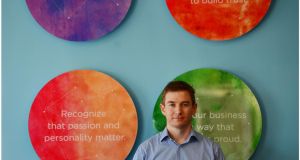 The Iona Institute has criticised multinational companies for calling for a Yes vote in the marriage referendum.

At a conference attended by Taoiseach Enda Kenny and more than 150 technology leaders and professionals yesterday, Mr McIntyre said a Yes vote would show Ireland as inclusive and attractive for international investment.

In response, Iona spokesman Ben Conroy said: “I wonder if Mr Kenny would be so keen about multinationals getting involved in Irish politics if they were endorsing particular political parties?

“I think a lot of eyebrows would be raised if Twitter said ‘vote for Renua, it’s good for business’ and threatened that voting for another party could somehow hurt our international reputation,” he said.

“Stephen McIntyre is clearly right that ‘individuals perform better when they feel respected and supported’. Presumably Twitter employees feel completely free to publicly support a No vote without any consequences for them?” he said.

The referendum takes place on May 22nd.