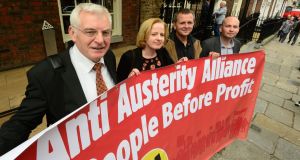 The AAA and PBP have formed a joint platform for the general election and held a press conference outside Leinster House on Wednesday to mark the start of the campaign. Photograph: Cyril Byrne/The Irish Times/Files

The housing crisis and the rising costs of rent will be “single biggest issue” during the general election campaign, the Anti Austerity Alliance-People Before Profit group (AAA-PBP) has claimed.

The AAA and PBP have formed a joint platform for the general election and held a press conference outside Leinster House on Wednesday to mark the start of the campaign.

Ruth Coppinger and Paul Murphy of the AAA and Richard Boyd Barrett of PBP said the voters faced a real choice in the election.

“The prospect that we are putting in front of people is that we could have a real alternative in the next Dáil in terms of the Anti Austerity Alliance and People Before Profit,” Ms Coppinger.

“A group of left, socialist TDs bringing the real concerns of working class people into the floor of the chamber every day. Obviously the key issues in the election are well known.

“The housing crisis would be the single biggest issue and the rent situation which is now impacting on middle income groups big time. The issue of the water charges and taxation justice would be big issue as well.”

Ms Coppinger, a TD for Dublin West, also said childcare is a big concern for voters, which she described as “second mortgage”.

She said funds for public services could be found by taxing wealth, such as a levy on millionaires.