Highest rate of income tax to be cut in budget - Kenny 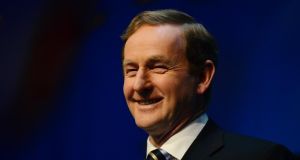 Taoiseach Enda Kenny was speaking at the annual dinner held by the Dublin Chamber of Commerce this evening. Photograph: Bryan O’Brien / The Irish Times

Taoiseach Enda Kenny has said next week’s budget will see the first step in reducing the 52 per cent tax on low and middle income earners, a rate he said has only hampered job creation.

In a speech tonight to the Dublin Chamber of Commerce - also due to hear from former Manchester United manager Sir Alex Ferguson - the Taoiseach said the Government was committed to maintaining its 12.5 per cent corporation tax, bolstering entrepreneurs and improving access to credit for the small and medium enterprise (SME) sector.

With speculation mounting ahead of the first budget to offer the Government potential manoeuvrability, Mr Kenny cautioned that the “chorus of calls” to abolish various charges and taxes would amount to “economic and social madness”.

However, in a gesture of appeasement to those whose incomes have been hit by austerity, he said the budget would see a reduction in income tax levels.

“I believe that the 52 per cent tax rate introduced by the previous government is anti-employment and anti-enterprise,” he told the Chamber’s annual dinner at the Dublin Convention Centre.

“It undermines the incentive to work, to do overtime, to start a business.

“Next week’s budget will be the first step of a multi-annual plan to reduce the 52 per cent rate on low and middle incomes. It will improve the competitiveness of our tax regime in a way that strengthens the economic recovery.”

He said there would also be “further reforms” to social protection and tax measures for lower paid workers to combat a situation in which it is often more financially viable to remain unemployed than to work.

“Analysis by the ESRI suggests that 60 per cent of unemployed men and women with children face significant financial disincentives to return to work and some are actually better off staying on the dole,” he said.

Regarding the often controversial 12.5 per cent corporate tax rate, he said he was committed to its retention. “As international tax loopholes progressively get closed down, our low general corporation tax rate will become even more attractive to business.”

With corporate taxation the subject of recent controversies, Mr Kenny commented on the Organisation for Economic Cooperation and Development’s “Base Erosion and Profit Shifting” project and its aim to “better align taxing rights”.

“In other words, companies should be taxed where they have their substantive operations,” he said.

“As you know better than most, Ireland has not been and will never be a brass-plate location.

“We only have and want real substantive foreign direct investment, the kind that brings real jobs. That’s why I believe that reform in this area offers more opportunities for Ireland than risks.”

Entrepreneurism and start-ups continue to be the economic buzzwords. Mr Kenny said the coming weeks would see the launch of the Strategic Banking Corporation of Ireland, set to make €500 million available to SMEs.

There was also a nod to today’s launch of the first “comprehensive national plan for entrepreneurship”, aimed at creating 93,000 jobs in start-ups within five years.