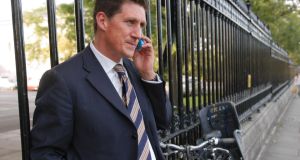 Eamon Ryan, leader of the Green Party, told delegates he was confident the party would turn its fortunes around.


Leader of the Green Party Eamon Ryan told delegates at the party’s 2013 annual convention at the weekend that the party’s future “was never more uncertain” but said he was confident it would turn its fortunes around.

He said the party needed to bring a “Green voice” back into Irish politics.   “We need more honesty in Irish politics and that is one of the reasons that we are fighting to keep this party alive.”

He said the Greens had taken “a real landing” in the last general election. The party lost all its Dáil seats shortly after leaving Government in early 2011. “The one and only advantage is that it allows you time to reflect on what you stand for, as you rebuild and present again your vision for the future,” he said.

“We want Irish politics to change but we seem stuck with picking between the same four parties that have been around since the foundation of the State. Each of them is so experienced in understanding the needs of their own constituency that they routinely promise their own electorate things that they know they can never deliver.  That practice is doing more than anything else to weaken the public trust in our system of democratic politics,” he said.

Mr Ryan said the Labour Party was “on the wrong track and has lost its way” while Sinn Féin was coming from “a 19th-century nationalist perspective”.

“Some seem to think that what we need is a new party of the right. Surely the one thing we have learnt over the last 30 years is that relying on market forces alone is not going to work.  We should leave that romantic notion with Margaret Thatcher, resting peacefully in the grave.”

He said the Greens had a record of standing up for proper democratic process and the protection of fundamental rights and had an “unrelenting instinct to point out corruption if there is any sniff that it might exist”. “Those characteristics are not unimportant; they are worth us passing on to a new generation of Green politicians.  If you agree with me, then I need you to get up and stand for election,” he said.

During the convention held in Salthill, Galway, party members also voted to support legislation to clarify the terms of the X case and for the risk of suicide to be included as a ground for abortion.