Government says Seanad reform is on the agenda 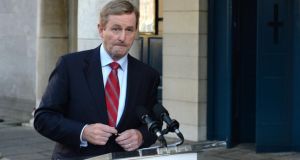 The Government has insisted after the unexpected defeat of the Seanad referendum that it will press ahead with its plans for a raft of constitutional reforms.

The Coalition has also signalled that it will examine an overhaul of the Seanad in the wake of the people’s decision to keep the Upper House. This was something it refused to grant in the referendum itself, which was cast as a choice between abolition or retention.

While another referendum would be required to execute an appreciable overhaul of the chamber, serious doubt is being expressed in Fine Gael circles as to whether there would be any appetite in the remainder of the Government’s term to go to the people on that question.

The abolition proposal was championed by Taoiseach Enda Kenny and its defeat, with 51.7 per cent of voters in favour of retaining the House, is seen as a big setback for him. TDs said privately over the weekend that Mr Kenny was likely to hear complaints about the conduct of the referendum campaign when the Fine Gael parliamentary party gathers for its weekly meeting on Wednesday.

Low turnout
With turnout low at 39.17 per cent, the result came as a surprise to both the Yes and No campaigns as a succession of opinion polls had pointed to a consistent majority for abolition. At the same time, a 65.2 per cent majority voted to establish a new Court of Appeal.

Questions are now being asked in Coalition circles as to whether the outcome might lead to a re-examination of plans for a “Constitution day” of simultaneous referendums on a package of changes originating from the Constitutional Convention.

Although senior Coalition figures see a requirement to take stock in the wake of the referendum, a Government spokesman said its plans for political reform would not be derailed.

The spokesman said: “The Government remains determined to continue with its reform agenda, to build on the reforms already introduced, to take stock of the decision of the people in relation to the Seanad and to consider carefully, in a consultative manner, potential options for reform of that institution.”

Fine Gael TDs had been told ahead of the last week’s vote to expect a “Constitution day” initiative some time in 2015. This reflects the view that politics in 2014 will be dominated by local and European elections.

Even before the Seanad poll, however, there was doubt in Government circles about the merits and feasibility of the convention’s proposals to lower the voting age to 16 and expand the franchise in presidential elections to citizens living abroad.