Government says Bill to create judicial council ‘due by 2017’ 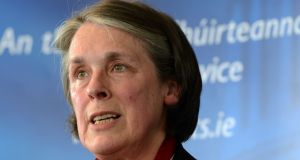 Chief Justice Susan Denham, who has criticised the 20-year delay in setting up a judicial council. Photograph: Cyril Byrne / THE IRISH TIMES

The Government has said it will publish a Bill on creating a judicial council, which would set standards for and examine allegations of misconduct against judges, before Christmas.

The introduction of such a Bill has been on priority legislation lists, published by the current Government and the previous Fine Gael-Labour coalition, for more than four years.

The announcement of the planned legislation comes after Chief Justice Susan Denham last weekend criticised the continued failure to establish a council, some 20 years after such a body was first mooted.

The legislation is among 25 pieces included in the Government’s priority list of Bills.

There is also an undertaking to carry out pre-legislative scrutiny of a Judicial Appointments Bill, which will change the manner in which judges are appointed.

That change has been championed within government by the Independent Alliance, especially Minister for Transport Shane Ross who has criticised “political patronage” under the current system.

However, with the draft legislation not due to be ready until early 2017, it may take a year before the becomes law.

More than 10 of the Bills on the priority list are carry-overs from the previous government.

They include the Maritime and Foreshore Bill, the Adoption (Information Tracing) Bill; the Hallmarking Bill; the Mediation Bill; the Health (Insurance) Bill and the Corruption Bill.

Among the new names is the Disability Bill, which will allow the ratification in Ireland of the UN Convention on the Rights of Persons with Disabilities.

This has been sponsored by Minister for Justice Frances Fitzgerald and the Minister of State for Disabilities Finian McGrath.

Ireland signed the convention in 2007 and in the intervening years, some 156 other States throughout the world have ratified it. Ireland is one of a relative handful, including two other EU members, which has yet to do so.

One of the major pieces of legislation stems from the Rebuilding Ireland housing and homelessness policy announced by Minister for Housing Simon Coveney during the summer.

The proposed Bill includes provisions for a new fast-track planning process through An Bord Pleanála for large housing development proposals.

Two new court divisions will also be established if promised legislation is enacted by this Government.

The first is a court that will specialise in family cases. The second has been described as a “dedicated new court to sensitively handle mortgage arrears and other personal insolvency cases”.

This court would be guided to some extent in its approach by the new Mortgage Arrears Resolution Service.

“The hearings of this court could be held in private if requested by the debtor,” the programme has said.

“The Government have undertaken an ambitious legislative work programme for the remaining months of 2016 and progress in these areas will continue the process of implementing the commitments in the “Programme for a Partnership Government,” said Government Chief Whip Regina Doherty.