Government has scope for bigger cut in pensions of ex-taoisigh 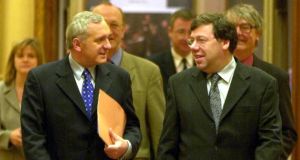 Former taoisigh Bertie Ahern and Brian Cowen. Their annual pensions will drop to ¤142,655 when 5 per cent cut is implemented. Photograph: Bryan O’Brien

In a front page story in The Irish Times last week Minister for Jobs, Enterprise and Innovation Richard Bruton was quoted on the plan to reduce the pensions of former taoisigh by five per cent.

He was responding to a report in the previous day’s Irish Times that the pensions of ex-taoisigh far exceed those paid to many of their European counterparts. Bertie Ahern and Brian Cowen each receive annual pensions of €150,163, though this is to drop to €142,655 when the reduction is implemented.

Richard Bruton justified the size of the cut on the basis that “clearly [pensions] are construed as being property rights so the Government is under an obligation to be proportionate in its action”.

This is of course a large subject because essentially the same constitutional principles apply whether one is speaking about cuts to the pensions or even salaries of politicians, public sector employees (like the present writer) or even judges. And these are the very people, who at one level or another, are taking the big decisions in this area.

It seems likely, on conventional practice, that the legal opinion attributed to Bruton did not spring, full grown, from the Minister’s brain, but instead originated in the Attorney General’s office.

Attorney generals’ opinions are not usually published. However, exceptions have sometimes been made. And the present situation is one in which, because of the potential conflict of interest just mentioned, there may be legitimate public concern that some groups are not bearing their full share of what should be a common burden, and that the Constitution is perhaps being used as a fig-leaf to conceal this.

Given this public concern, this is a situation in which a departure from the usual practice against publication of the Attorney General’s opinion is justified. As they say, I think we should be told. To put it simply, the major question in the Attorney’s opinion would be whether a change to the taoisighs’ pension arrangements would violate their constitutional right to property.

The only superior court authority relevant here is that of Mr Justice Bryan McMahon in the High Court in Haire v Minister for Health (2009).

The central fact was that the Financial Emergency Measures in the Public Interest Act 2009 enabled the Government to reduce the amount paid by the State to service providers in a wide range of categories. Using this power, the Minister had reduced payments made to pharmacists under a pre-existing scheme, which was taken to be as good as a contract. A pharmacist brought proceedings challenging the constitutionality of the 2009 Act.

The first stage in the judge’s reasoning was the well-established law, that a contract, such as that between the plaintiff and the State medical authority, is regarded as a property right. Thus it is protected by Article 40.3.2, which states “The State shall protect as best it may from unjust attack... the property rights of every citizen.”

However the judge’s main line of reasoning for rejecting the plaintiff’s argument was that, given the State’s motivation for altering the rates of payment — the financial emergency — the reduction of the pharmacists pay rate was unjust. Mr Justice McMahon stated “... ‘unjust’ in this sense, refers to matters such as retrospectivity, lack of fair procedures, unreasonableness and irrationality, discrimination, lack of proportionality”.

One can tease out the implications of this passage for the present situation by saying first that no one is suggesting that any fraction of pensions already paid out should be scooped back. So there is no retrospectivity. In addition, the measure applies to all taoisigh, for example there is no attempt to apply it only to those responsible for the crash; so there is no discrimination.

The trickiest part of the judge’s formulation to apply lies in the test of “proportionality”. In Haire, the cut was of the order of 25 per cent. One should be careful in comparing pharmacists and taoisigh: for instance the latter made some contributions to their pension, but these were insignificant by any market standards; pharmacists have to do without State cars and pay for their own mobile phones.

But even with these difficulties of comparison, it does seem as if the proposed five per cent cut is very much on the moderate side of what could be regarded as proportionate.