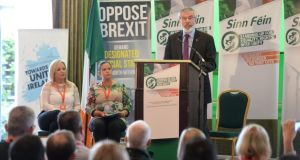 Sinn Féin leader Gerry Adams has said he will be seeking re-election as party president at the November ardfheis but will then set out his “own future intentions”. Party sources said the question of their long-serving leader standing aside was now one of “when, not if”.

Mr Adams said he would again seek re-election as Sinn Féin leader at the party’s ardfheis in November and would, if re-elected, then indicate a timetable for his departure at the event in Dublin’s RDS.

“A lot of what I was saying today on this issue, I was actually talking to Sinn Féin people, Sinn Féin members,” he said, adding that a transition was proceeding along a planned path.

“There are half a million people on this island now who vote for our party. What I was saying to those who have garnered that vote is, not withstanding Martin McGuinness’s untimely demise, the plan which we have collectively been working on is proceeding.

“And the next staging post in that is this next ardfheis. And I just feel duty bound that the first people who should hear about my future intentions are the members of our party.”

Mr Adams said he would be seeking re-election as party president at the ardfheis but would then set out his “own future intentions”.

“I will be allowing my name to go forward for the position of uachtarán Sinn Féin. And if elected I will be setting out the process of generational change, including my own future intentions.”

He added that he planned to lead Sinn Féin into the next election. However, party sources speculated that another ardfheis could be held next spring, which would allow the leadership issue to be addressed.

Mr Adams declined to be drawn on this suggestion and dismissed suggestions he could remain on as party president with a TD taking up a leadership role in the Dáil.

Sinn Féin is working on a 10-year strategy and Mr Adams said the results of this will be unveiled at the ardfheis. Party leadership and possible participation in a future coalition will be discussed as part of this process.

Michelle O’Neill, Sinn Féin’s leader in Northern Ireland, will make a speech on Wednesday on efforts to revive the Stormont Executive.

Mr Adams was also pressed on comments he made last week when he said jailing the IRA killers of Tom Oliver would be “totally and absolutely counterproductive”. Mr Oliver (42), a father of seven from Riverstown, Co Louth, was abducted and murdered by the Provisional IRA. His body was found on July 19th, 1991, in south Armagh. He had been shot in the head.

The IRA claimed he had been a Garda informer – a claim the Oliver family denies. Nobody has ever been convicted of the crime, but gardaí launched a new investigation this year into his murder.

Mr Adams questioned whether “filling the jails up again for the thousands of offences that have yet to be dealt with” would help with the peace process.

“All of the parties, including parties who are now criticising my remarks, agreed that no one would serve a sentence longer than 10 years. So there are these two imperatives: there is an imperative to support the families if they want prosecutions and it’s up to the courts to decide what comes out of that. And then the other proposition – does anybody think that filling the jails up again for the thousands of offences that have yet to be dealt with, that that’s going to help the overall process?”