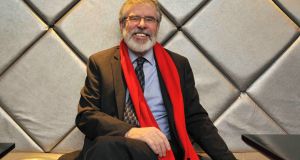 Sinn Féin president Gerry Adams has denied he is misleading the public about the amount they will save on water charges if the party gets into government.

Mr Adams insisted he was correct in asserting that the saving per household would be €260 and not the €160 figure others had claimed when conservation assistance grants were taken into account.

Speaking to Seán O’Rourke on RTÉ Radio he also accepted that in October 2014 he had indicated he would be paying the water charges for his holiday home in Co Donegal but said he had changed his mind to show solidarity with the people of his constituency in Louth.

Labour Minister Ged Nash described Mr Adams’s radio performance as “embarrassing”. “Over the course of the interview he tied himself in knots on the most basic details of his own tax policy,” he said.

Speaking after the interview Sinn Féin finance spokesman Pearse Doherty defended the leadership of Mr Adams and rejected claims he was becoming a “liability” to the party’s election candidates.

Mr Doherty said: “Gerry Adams has led this party for many, many years and Sinn Féin has nearly doubled our support in the last five years and that is down to the leadership of Gerry Adams and the collective leadership of members right across this island.”

Mr Doherty also dismissed suggestions it was time for Mr Adams to stand down as leader.

Asked if he was interested in the leadership in the future he said it was “not something I have any personal ambition to but it’s something that if the party so decided at a later stage that it was something they wanted me to do then I’d be willing to step up to the challenge.

But he said it was not about leadership. “This is about making sure that we provide a different type of society.

He added that “who’s at the helm is a secondary issue. It’s about the type of policies we’re introducing.”

He said: “It’s not about who’s in the position of leadership. I’ve been involved for many many years in the leadership of Sinn Féin, working hand in hand with Gerry Adams, Martin McGuinness and Mary Lou McDonald and we have very clearly given the Irish people a very clear alternative.”

He said before the election it was “tweedledee or tweedledum. It was one party replacing the other with no real change in people’s lives. For the first time in many years the electorate have a clear choice.”

Mr Doherty was speaking at a press conference outlining the party’s policy on long-term economic growth.

Mr Adams also clarified that Sinn Féin would maintain a tax relief on private health insurance if in government.

On taxation, Mr Adams said an individual earning €100,000 a year would pay a marginal rate of tax of 59 cents in the euro.

He said the Sinn Féin plan was to transform a two-tier health system that was not working into a system based on equality and the citizen’s right to have services free at the point of entry and on the basis of your health needs.

Asked how much longer he intended to remain leader of Sinn Féin, considering he has been in the position for 33 years, Mr Adams said he would remain for as long as his family, his health and his party, wanted him to be.

Mr Doherty attacked Minister for Finance Michael Noonan who he claimed was trying to “con the electorate” and he accused him of lying.

“In week one he got it wrong by €2 billion,” Mr Doherty said about the “fiscal space” or money available for tax cuts and increases in funding of public services.

Mr Doherty said the Minister stated that the abolition of the Universal Social Charge (USC) would cost €3.7 billion but it would in fact cost €4.2 billion because the abolition was incremental over the term of an administration in which some €500 million more in USC would be collected.

“The reality is that Michael Noonan’s figures don’t add up and his policies will mean more chaos in health, in housing and more chaos in rural Ireland.”

He claimed Fine Gael’s policies were anti-family because “they increased charges on everything families really need – your home, your water, your prescriptions, your education – leaving many very little to live on”.

He reaffirmed Sinn Féin’s commitment to abolish water charges and the property tax and to replace the funding with an extra tax on incomes of 7 cent on every euro above €100,000 earned.