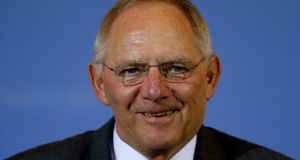 Germany’s finance minister has questioned the need for any “radical change” in Ireland’s bailout programme, dealing a fresh blow to the Government’s campaign for bank debt relief.

Wolfgang Schäuble’s remarks came as the EU Commission said it hoped the ESM fund will not be used to recapitalise banks directly, a stance which is at odds with Dublin’s claim for aid to reduce the bill for rescuing Allied Irish Banks and the Bank of Ireland.

“We are moving step by step forward. Each member state case is different,” the German minister told The Irish Times and Germany’s Die Zeit.

As the Government prepares to close the bank guarantee scheme to new liabilities at midnight tomorrow, new figures seen by the two papers show that only 2 per cent of total Irish bank funding came directly from the euro zone before the guarantee was granted in 2008.

At that time the biggest sources of foreign lending to Irish banks were Britain, the US, and offshore funding.

Dr Schäuble said the previous Fianna Fáil-Green administration had “sole responsibility” for the “farthest-reaching guarantee” of the financial crisis.

However, he said Ireland won back international trust “with the help of European partners and with a great engagement of itself” in the wake of the 2010 bailout.

“A radical change of the programme would bring with it the danger that trust, which has just been won back, would be lost,” he said.

“Trust is a currency that is hard-won but quickly lost . . . therefore it is of great importance that the programme is implemented successfully as agreed.”

Mr Schäuble spoke on Monday before the eurogroup chief Jeroen Dijsselbloem questioned whether the ESM will ever be used to recapitalise banks directly.

This stance in relation to ESM bank rescues was backed yesterday by the commission.

“We hope to be in a position where the deployment of such an instrument will not be necessary,” said the spokesman for economics commissioner Olli Rehn.

“[This] does not mean that an agreement on such an instrument is not something that we continue to work towards, and work on the instrument for the ESM which will allow for direct recapitalisation to be an option available to us continues.”

Such remarks – from a body which has been a strong ally of Ireland in the clamour to improve the terms of the bailout – underscore the challenge the Government still faces to achieve a deal with the ESM.

The Government insisted, however, that a deal by EU leaders last year to break the loop between bank and sovereign debt still stands.

“Our position is that the agreement by heads of state and government on June 29th supersedes comments as reported from the commission,” said the spokesman for the Department of Finance.