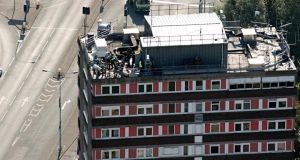 The Divis Flats in west Belfast before their demolition. Photograph: Pacemaker

The Irish government of Garret FitzGerald was keen to see the demolition of the Divis Flats complex in west Belfast as an early fruit of the Anglo-Irish Agreement in 1985.

In a dispatch from the British embassy in Dublin to the foreign and colonial office in London, the ambassador, Sir Alan Goodison, reported he had been given a record of a private conversation between Bishop Cahal Daly of Down and Connor, and members of the Department of Foreign Affairs by the Irish official, Michael Lillis.

“‘One particular project he [the bishop] would wish to see undertaken as soon as possible after the agreement is the demolition of the Divis Flats complex.

Dr Daly had told Mr Lillis that 50 per cent of the Divis residents could be rehoused locally, and he was prepared to make a church-owned former British military base at MacRory Park available for public housing.

Goodison went on: “If this happens he [Bishop Daly] will ensure that the Housing Association and labour employed is local and not subject to IRA racketeering.”

If the Divis complex were destroyed, Lillis told the ambassador, not only would the residents acquire better housing “but the Provisionals would lose one of their key areas”.