“Independents are not a slave to any political ideology. Independents work for the people who elect them” 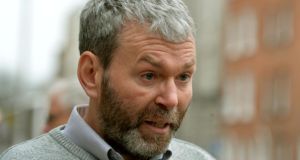 Garda whistleblower John Wilson: “This country has never been in such dire straits. We deserve more from our politicians.” Photograph: David Sleator

The national organisation called Independents Together (Meitheal Neamhspleáigh) has been set up to support and encourage people running as Independents .

Mr Wilson, who underwent bowel cancer surgery in March, said he had decided not run as an Independent candidate in the Cavan-Belturbet area because of ill-health. However, he said he supported the group as it was important for Independents to unite and create “change” in Government.

Ideology
“Independents are not a slave to any political ideology. Independents work for the people who elect them,” he said.

“This country has never been in such dire straits. We deserve more from our politicians. This is a great country but unfortunately our political system is broken. If we don’t get change in the next few years, we’re never going to get it.”

Mr Wilson, who spoke at the event at Buswells Hotel, said he knew of a four-year-old girl with Down syndrome who was at risk of losing her special needs assistant (SNA) because she had shown up as “very bright” in tests.

“To use the word disgusting in its proper context, that is disgusting,” he said.

Controversy
Former Garda commissioner Martin Callinan resigned in March after his use of the word “disgusting” to describe Garda whistleblowers, including Mr Wilson, when he appeared at the Oireachtas Committee of Public Accounts in relation to the penalty points controversy.

Mr Wilson was a member of the Garda Síochána for 30 years before he resigned last year.

Founder of the group Jim Connolly, who is not running as a candidate, said his goal was to get a majority of Independents in councils and the Dáil. Mr Connolly said membership was voluntary with no fee, and people did not have to agree on the same policies to join.