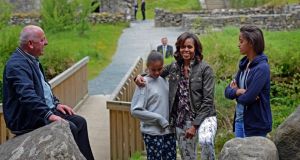 The cost of the security operation in the Republic relating to the G8 summit and the visit of US first lady Michelle Obama and her daughters to Dublin this week is set to reach between €3 million and €4 million.

Garda sources said while the final amount had not yet been established it was “not expected to go higher than €4 million”.

The cost of the Obama visit has attracted some negative criticism in both the US and Northern Ireland where the PSNI policing bill for the G8 summit has been put at more than £50 million (€58 million).

In the US, conservative press like the Washington Times criticised how US taxpayers foot the bill for trips such as the First Lady and her daughters’ tour of Ireland, including an overnight stay in a “$3,300-per night” suite at the Shelbourne Hotel. Newsmax wrote that this “two-day trip” to Ireland and Northern Ireland amounted to “approximately $5 million [€3.8 million].”

The US secret service said its policy was not to disclose the costs it incurred for policing of overseas visits. But Ben Rhodes, US deputy national security adviser said yesterday: “The secret service is going to do what they think is necessary to protect the president.”

While the G8 summit took place north of the Border at the Lough Erne resort near Enniskillen, Co Fermanagh, its proximity to the Border with the Republic necessitated a major Garda operation involving an estimated 900 personnel.

The force put in place a series of static checkpoints across the Border to monitor and control the movement of traffic, would-be violent protest groups or any terrorist threats.

A large team of gardaí also patrolled the Border putting in place roving checkpoints. Hundreds of gardaí were drafted in to the Garda’s northern region. These gardaí from other parts of the State were catered for in accommodation in the area and the cost of that, along with subsistence allowances, Garda overtime and the purchase of some equipment such as barriers for checkpoints and crowd-control all added to the cost of the security relating to the G8 summit.

When Mrs Michelle Obama and her daughters Malia and Sasha came to Dublin they stayed in the Shelbourne Hotel in the city centre, necessitating some surrounding streets being sealed off and a permanent Garda presence being put in place to secure those closures.

Similar to the plan in place near the Border under Assistant Commissioner Kieran Kenny, large teams of public order gardaí were maintained on standby in the event of any serious disturbance in Dublin or Wicklow, where the Obamas visited while the G8 was taking place.

Meanwhile, PSNI Chief Constable Matt Baggott has defended the £50 million-plus cost it incurred for policing the two-day G8 summit, saying it was necessary and justified.

Mr Baggott held a press conference in Belfast yesterday morning where he looked back on “the most peaceful and secure G8 summit in history”. There were just two arrests connected with G8 protests in the North.

The PSNI’s force of 7,200 officers was augmented by 3,600 officers from England, Scotland and Wales.