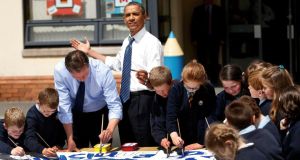 US president Barack Obama reacts as the sun comes out as he works alongside Britain’s prime minister David Cameron and students on a school project about the G8 summit during a visit to the Enniskillen Integrated Primary School yesterday. Photograph: Reuters

World leaders meeting at the G8 summit in Co Fermanagh have called for flexibility in fiscal policy as they seek to overcome weak prospects for the global economy.

The call by the leaders of the Group of Eight major powers came ahead of talks this morning at the Lough Erne Resort near Enniskillen to tackle tax evasion by big business and aggressive tax avoidance.

The intervention backs moves already under way in the euro zone to ease the pace of tax increases and spending cutbacks in countries such as France as leaders confront concern that the years-long austerity drive is fanning recession.

“The pace of fiscal consolidation should be differentiated for our different national economic circumstances,” the G8 leaders said in a statement after their first session of talks.

The Government insists it will stick to the fiscal targets laid down by the EU/IMF troika to ensure its exit from the bailout at the end of the year.

However, Irish officials are already examining how money could be put back into the economy in next year’s budget.

With Dublin still counting on concessions from its EU partners to ease the cost of rescuing Allied Irish Banks and the Bank of Ireland, the G8 leaders urged the euro zone to push ahead with its banking union initiative and said it was “strongly needed”.

In spite of German reservations about this project, chancellor Angela Merkel was one of eight co-signatories of the statement alongside the leaders of the US, Britain, Canada, Russia, France, Italy and Japan.

The G8 leaders said actions by policy makers in the US, Japan and the euro zone have made it less likely that economic growth will slow sharply.

“Downside risks in the euro area have abated over the past year, but it remains in recession,” the leaders said.

Their statement came hours after Herman Van Rompuy, president of the European Council, said the existence of the single currency was no longer under threatened.

“There is no comparison between the current situation and the situation let’s say nine months ago, where the euro and the euro zone was under existential threat. That isn’t the case any more.”

With leaders due to discuss business taxation today, Mr Van Rompuy said fraud and evasion undermined the social contract in democratic societies. “In times of budgetary consolidation, they become more unacceptable than ever; morally, politically and financially unacceptable,” he said.

This debate has potential to raise difficult questions for the Government, give controversy over the tax practices in Ireland of companies such as Apple Computer.

On the fringes of the summit, however, Taoiseach Enda Kenny said Ireland had nothing to hide and everything to gain from the debate.

“I can’t say what other leaders might speak of, but it hasn’t been raised with me today. International leaders are very clear that a low corporate tax economy doesn’t mean anything wrong in regard to tax,” he told reporters.

“We have been very upfront about this. I said this at the European Council a number of weeks ago.”

The opening of the two-day summit was marked by continuing global tensions over the civil war in Syria, with Russian president Vladimir Putin under pressure from US president Barack Obama and other leaders to withdraw his support for the Assad regime.

This question was expected to dominate bilateral talks between the two leaders which began around teatime. Mr Putin has made it clear that he opposes moves by the US to arm the rebels and he will resist the imposition of a no-fly zone over Syria.

Mr Obama’s first engagement yesterday was in Belfast, where he told an audience of 2,000 predominantly young people the achievements of the peace process were extraordinary.

However, he called for further resolute actions to heal the divide between the two communities. “There are still wounds that haven’t healed, and communities where tensions and mistrust hangs in the air. There are walls that still stand; there are still many miles to go.”