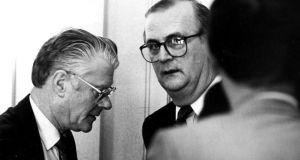 Bart Cronin, who has died aged 82, was a colourful, popular and effective media spokesman for former taoiseach Albert Reynolds and a succession of ministers.

His dry sense of humour, the deep knowledge of politics, the near-constant cigarette, and the well of anecdotes, were the hallmarks of a press officer who diligently served ministers of varying political colour.

His strong commitment to Fianna Fail was set aside when briefing journalists on the merits of a Fine Gael or Labour minister on whose behalf he was speaking.

A native of Tureencahill, Rathmore, Co Kerry, he began his career in Aer Lingus and worked for some years in the airline’s press office. He later joined his friend, Fianna Fáil minister George Colley, as departmental spokesman when Colley occupied a number of different ministries.

As Colley and Charlie Haughey prepared for the inevitable party leadership battle, with Haughey eventually winning, Mr Cronin was a formidable ally.

When Fianna Fáil was out of power, he worked for ministers such as Fine Gael’s John Bruton and Labour’s Michael O’Leary.

He worked closely with Reynolds when he was minister for finance and Reynolds appointed him head of the Government Information Service (GIS) when he took over as taoiseach in 1992.

Retired RTÉ journalist Sean Duignan, who worked with him as government press secretary when Reynolds was taoiseach, wrote of Mr Cronin in his memoir One Spin on the Merry-Go-Round, that behind “an artless homespun exterior lurked the most compassionate of men’’. Duignan recalled he came to trust and rely on him more than anyone else.

A fluent Irish speaker, Mr Cronin remained hugely interested throughout his life in the culture of his native Sliabh Luachra, launching its local journal some years ago.

Mr Cronin, who lived in Santry, Dublin, is survived by his wife, Maire, three daughters, two sons and grandchildren.