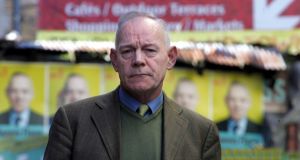 Mannix Flynn, a former resident of St Joseph’s Industrial School in Artane, wants the band to be brought to an end due to its associations with the Christian Brothers. File photograph: Cyril Byrne/The Irish Times

Independent Dublin City Councillor Mannix Flynn was escorted by gardaí from City Hall on Dublin’s Dame Street on Monday evening following a protest where he called for the disbanding of the Artane Band.

Three gardaí escorted Mr Flynn from City Hall at around 5.30pm ahead of the monthly council meeting, after he climbed out an upstairs window of the main council chamber holding a banner calling for the band to be disbanded.

Mr Flynn sat on the window ledge, around 30ft from the ground for some minutes, before he calmly left with gardaí. Gardaí said he had not been arrested.

Mr Flynn returned to the council chamber shortly before 7pm. He said he had been taken to Pearse Street Garda station where he explained he was “engaged in a lawful protest”. He said gardaí told him they had been concerned for his safety because of the height of the window ledge, but told him he was free to go.

Mr Flynn, a former resident of St Joseph’s Industrial School in Artane wants the band to be brought to an end due to its associations with the Christian Brothers.

The band is synonymous with the GAA and traditionally plays before marquee matches at Croke Park, including All-Ireland finals.

While celebrated for its musical heritage, for some the band remains a symbol of the industrial school.

Con Hogan, chairman of the Artane School of Music, from which the Artane Band is drawn, recently issued a statement saying it is a community-based, voluntary organisation located in the North City Artane area from which it takes its name.