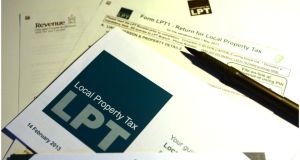 Local Property Tax receipts accounted for €32.5 million in funding for Fingal last year, and such a move will see a reduction of almost €5 million in council finances next year if similar figures are recorded. Photograph: Bryan O’Brien/The Irish Times

Fingal County Council has become the second council in the State to signal its intention to reduce the Local Property Tax by 15 per cent following a vote at yesterday's  council meeting in Malahide.

The motion to reduce the tax by the maximum allowable percentage, which was put forward by both Sinn Féin and Fianna Fáil, passed easily with 30 votes in favour, seven abstentions and no registered opposition among the 37 councillors present.

There were, however, significant dissenting opinions from Fine Gael, Labour, Green Party and Independent members, who implored their council colleagues to defer a policy decision until after the results of an official public consultation process could be brought forward.

Although a firm statement of intentions, the vote has no practical implications until the council convenes its budget meeting in September, which could see the motion officially ratified ahead of the 2015/2016 fiscal year.

Local Property Tax receipts accounted for €32.5 million in funding for Fingal last year, and such a move will see a reduction of almost €5 million in council finances next year if similar figures are recorded.

Commenting on the vote, Darragh Butler, Fianna Fáil councillor for Swords, attacked what other party members labelled an “anti-Dublin” tax.

“The way the Minister [Hogan] has gone about this has been absolutely shambolic. A no vote to this motion means Fingal will be subsidising the rest of the country… Fingal residents are paying through their noses at the moment,” Mr Butler said.

Pleas by council executive Paul Reid to defer making a decision on property tax policy proved unsuccessful, as did Fine Gael’s attempt to pass an amendment to the motion meaning it could not be passed until Fingal’s full budget report became available in September.

Sinn Féin had previously signalled its intention to impose a 15 per cent reduction among as many local authorities as possible, and has already tabled motions in councils in Cork, Galway, Louth and Dublin.

Sinn Féin councillor Paul Donnelly stated his belief that a majority of Fingal residents favoured the move being put forward by his party.

“We canvassed many thousands of doors and the vast majority of people in every part of Fingal supported our promise to introduce a motion to reduce the property tax by 15 per cent. Sinn Féin are committed to reversing this tax if elected to government. But in the meantime we aim to reduce the burden of this tax for households here in Dublin,” Mr Donnelly said.

Former Fingal mayor Kieran Dennison voiced his displeasure with the proposed move, calling it “fiscally irresponsible”, while Independent councillor David O’Connor asked the council executive to disclose “where will playgrounds close [if 15 per cent reduction is brought in], where will grass not be cut, how many families will have to wait longer on housing lists?”