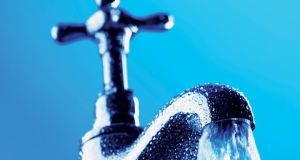 A key elements of the water revised plan will provide relief from water charges for people living on fixed incomes.

Minister for the Environment Phil Hogan will attempt to defuse the row between the Coalition parties over water charges this week with a set of proposals designed to allay Labour Party concerns.

The key elements of the revised plan will provide relief from water charges for people living on fixed incomes, an acceleration of the meter installation programme and a possible reduction in the €50 a year standing charge.

Last night in Arklow, Co Wicklow, the Taoiseach said the water charges, due to be announced before the local and European elections, would be the “the last of the difficult impositions” the Government would put upon the Irish people, following the successful exit from the bailout.

The introduction of the charges next year is part of the EU-IMF bailout agreement. Mr Kenny said Ireland was now doing better than many European countries including some that were not bailout “programme” countries.

The proposals will be discussed at the Economic Management Council (EMC) tomorrow and are expected to go to Cabinet on Wednesday.

The Taoiseach and Tánaiste Eamon Gilmore had a furious argument when water charges went to Cabinet before Easter.

Labour Ministers objected to a proposed €50 a year standing charge and also to the fact that a majority of households would have to pay an assessed charge in the early years of the scheme.


Serious rift
Another concern for Labour was that in the initial plan, water charges would apply to almost all households with few exemptions on the grounds of age or income.

The row threatened a serious rift in the Coalition as Mr Kenny made it clear he wanted the scheme announced before the elections on May 23rd, with particular emphasis on the fact that the average household bill would be €240 a year.

Mr Hogan and his officials have been working over the past two weeks on a compromise set of proposals that take account of Labour’s concerns.

Under the new plan, people on fixed incomes such as pensioners and those on disability allowances will be given relief on the water charge, which is likely to be included in the household budget package which covers electricity and gas bills.

The funding for the measure will come from the Department of Social Protection, with extra resources to be made available from the exchequer to cover the cost.

Mr Hogan is expected to propose that households asked to pay an assessed charge pending the installation of meters will be entitled to claim a rebate when metering comes into operation.

Another important issue for Labour will be the formula for the assessed charge which will apply to households until meters are installed.

Party Ministers would like to see a system in which the number of occupants and not just the size of the house is taken into account.

Water charges are a key issue in the local election campaign and have become the focus for attack by Opposition parties and Independents.

The outcome of the Cabinet deliberations on the issue this week could have a vital bearing on the prospects of Fine Gael and Labour candidates.

The first bills for water will not be sent out to households until next January , but the billing date will start in October.