Fine Gael canvassers advised not to call during soap operas

Canvassers should not take shortcuts over walls and always close the gate, says guide 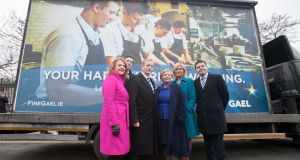 The Fine Gael guide to canvassing says never to pick a time when people won’t be receptive including during televised sports events or blockbuster episodes of TV soap operas. Photograph: Gareth Chaney Collins

Fine Gael canvassers have been advised not to upset television viewers by knocking on doors during the soap operas.

The party is outlining the ‘dos and don’ts’ during the general election campaign in its canvassing guide and is telling those knocking on doors for the party not to take shortcuts over walls and hedges.

The guide says never to pick a time when people won’t be receptive including during televised sports events or blockbuster episodes of TV soap operas.

But they should always knock on the door rather than ring the bell and make sure they are “interested, charming and engaged”.

The canvassers are also being told to be chatty, thank the voter and make sure you close the gates behind you.

And whatever you do don’t waffle, don’t spend too long on one door and don’t get involved in arguments on the doorstep.

When asked why a voter should support Fine Gael, the party is advising them to say their plan will deliver and the party will continue to make prudent and responsible decisions.

Its key opposition messages for Fianna Fáil include reminding voters the party has not changed and is a “high tax, high spend party”.

It is being advised to say Fianna Fáil taxed jobs and has refused to cut the main rate of the Universal Social Charge.

On Sinn Féin, Fine Gael canvassers should say their policies will kill jobs and their wealth tax will result in money, investment and jobs leaving the country.

As for the Independents, that is a vote for the unknown, the canvassing guide says.

“Independents are a hodgepodge of constantly changing groupings which can’t agree on a policy programme.”

Renua also comes under attack in the guide and Fine Gael wants people to stress their flat tax proposals would reduce the tax take by €3.5 billion.

“Their claim that this black hole would be covered by the dynamic effect of the tax is totally unsupported by research and has not been costed by the Department of Finance.”

The main message from the party is that the country cannot go back to the same Fianna Fáil who “wrecked the economy, have learned nothing from the past and are still the high tax, high spend party”.

“Or risk the fragile recovery with Sinn Féin, the high tax, anti-jobs party who would wreck the economy; think those earning €35,000 are high earners and would tax us all by stealth.

“And we certainly don’t need the chaos and crises that would surely happen with those on the left and the Independents who are a hodgepodge of constantly changing people and positions.”