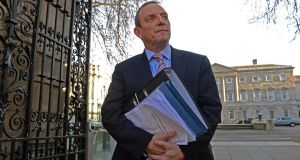 Fine Gael TD Jerry Buttimer said his party would have to accept that voters do not want the current Coalition to continue. Photograph: Eric Luke/The Irish Times

Fine Gael failed to explain to people why they took the hard decisions in government that impacted hugely on people over the past five years and failed to show their empathy and compassion in the campaign, according to Fine Gael Cork South Central TD Jerry Buttimer.

Mr Buttimer, who is battling to hold his seat against a strong challenge from Sinn Féin Cllr Donnchadh O Laoghaire, said Fine Gael would have to respect the wishes of the electorate; that it does not want Fine Gael and Labour Coalition to continue.

“The people have spoken and you must listen to what they have said and they have voted in a huge way sending a message to this government that they didn’t want us – there’s a responsibility on the people who are in the next Dáil to reflect upon that,” he said.

“If that means Sinn Féin and Fianna Fáil must come together that’s a matter for them but the politics of protest cannot govern the country- there’s a responsibility on those elected today to be held to account for their policies and for their actions and you can’t be all things to all people.

“There’s an obligation now on those on the far-left and Sinn Féin and Fianna Fáil to act responsibly – what is extraordinary for me is that the Irish people this afternoon and today have said to Fianna Fáil that you have atoned and we forgive you for the ills that you have brought on the people.”

Mr Buttimer said people were doing better now than when the Coalition came into government but he also acknowledged that not everyone felt the recovery and Fine Gael had failed to adequately recognise that in its campaign.

“We came into Government five years ago and put in place a plan to rescue the country and that meant stabilising the economy. . . whether we did that on the back of people without telling them there was a vision, there was a future is something we have reflect on.

“I suppose in hindsight we did lack that empathy and that compassion because what we were trying to do was make the lives of people better and perhaps the error of our ways was the way we told it to people.

“We need to reflect on that because we did make mistakes as a political party but today isn’t a day for that sort of soul searching, today is about acknowledging the result and saying the next Dáil is taking shape and must put in place the next government.”