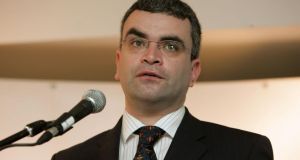 Fianna Fáil’s Dara Calleary: “When we see the proposals I’ll reflect on those proposals and discuss it internally with my colleagues.” Photograph: Frank Miller


The Fianna Fáil leadership faces pressure over abortion within the party this weekend with four motions on the topic tabled for discussion at its ardfheis in Dublin.

The ardfheis, to be held at the RDS, is the 74th such gathering of party members and some 4,000 delegates from a membership of more than 18,500 are expected.

Two years after the party’s collapse in the last general election, attention within Fianna Fáil is turning to preparations for the local and European elections next year as it seeks a new cohort of young candidates in a bid to turn around its fortunes.

With the party organisation still in reform mode, some of the 220 motions for discussion centre on new arrangements for the election of a party leader and on the convening of a special ardfheis before Fianna Fáil enters any future coalition government.

The agenda includes a discussion on sustaining rural Ireland, at which Irish Times columnist John Waters will speak, and another on the future of Dublin.

Contentious debate
At the same time, motions on abortion backed by cumainn in Dublin, Cork, Roscommon, Galway and Donegal suggest that contentious debate may be in store.

One of these calls on the ardfheis to reaffirm Fianna Fáil’s stance as a “pro-life party” which will oppose any legislation with potential to be “significantly expanded beyond the limited circumstances where an intervention is required to protect mothers”.

Another calls on the ardfheis to adopt a policy requiring a referendum before any legislation on the X-case ruling of the Supreme Court.

A further motion calls on Fianna Fáil to oppose any legislation to introduce the risk of suicide as a threat to life of the mother “and legitimises abortion in Ireland”.

Asked whether such motions, if passed, would set policy for Fianna Fáil, front-bench TD Dara Calleary said they would “guide” debate within the parliamentary party.


Internal divisions
Although he acknowledged internal party divisions over abortion, he said Fianna Fáil remains a “pro-life party” and he declined to set out his position in relation to legislation being prepared by the Government. “When we see the proposals I’ll reflect on those proposals and discuss it internally with my colleagues,” he said.

Mr Calleary said party members who took part in the Meath-East byelection campaign reported a sense that the public mood towards Fianna Fáil was changing.

“Many members are out with their local area representatives, with their councillors, knocking on doors every evening, as is the party leader. They’re getting a sense of that so I think there’ll be a better sense of anticipation,” he said.

The ardfheis begins on Friday and culminates with the speech of party leader Mícheál Martin on Saturday.