Government must ‘convince public they’ve learned from their mistakes’- Flannery 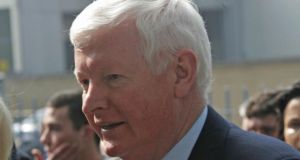 Former Fine Gael strategist Frank Flannery says an urgent effort must be made to save Fine Gael’s public perception ahead of an election in 2016. Photograph: Eric Luke/The Irish Times

The Fine Gael-Labour coalition has until the end of March to salvage its hopes for re-election to Government, according to former Fine Gael strategist Frank Flannery.

Commenting on the findings of this morning’s Irish Times/Ipsos MRBI opinion poll, which saw Fine Gael slump to its lowest level of support in over a decade, the party’s former director of strategy believes an urgent effort must be made to save its public perception ahead of an election in 2016.

“They haven’t much time. They have until the end of March to get themselves back on the pitch with a credible positioning, (and) reasonable polling results if they’re to have a chance of winning an election 12 months later,” Mr Flannery told the Newstalk Breakfast show.

The comprehensive survey, which involved a sample of 1,200 voters interviewed earlier this week, indicated that Independents and smaller parties have received a surge of support.

Results also show Coalition parties have suffered a cumulative drop in support of eight percentage points since the results of a similar opinion poll last month.

Asked if re-election to Government remains a possibility for Fine Gael, Mr Flannery said the embattled party can yet mount a comeback.

“I think they can, yes, but it will require a very well thought-out and monumental effort.

“I think the Government has an awful lot going for it. In many ways it’s done a very good job. It has to rapidly find a way to communicate that to the general public, and see if the general public will agree,” he said.

“I think the Government, in the last week or so, has begun a certain response ... It has begun to talk to the people more and communicate more. I think it has to get really involved in that,” added Mr Flannery, who drew comparisons between the party’s current plight and British prime minister Tony Blair’s political struggles at the turn of the Millennium.

“If I can reference you to Tony Blair’s second term, that’s when he did his real work. The first term is spent trying to fix up what you came into.

“Fine Gael hadn’t been in Government for about 14 years, and Labour since 1997, so in a way they will make mistakes.

“They should learn to admit their mistakes, and convince the public that they’ve learned from their mistakes and won’t repeat them.”