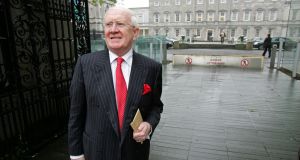 Pat The Cope Gallagher: the newly elected TD for Donegal has presented a four-point manifesto to his Fianna Fáil colleagues in support of his bid to become ceann comhairle. Photograph: Frank Miller

Fine Gael and Fianna Fáil are to consider supporting an Independent candidate for the position of ceann comhairle.

Up to 10 TDs are canvassing for support in their bid to become the next ceann comhairle.

Fine Gael and Fianna Fáil both considered the matter yesterday and deferred a decision until next week.

Mr Gallagher, the newly elected TD for Donegal, presented a four-point manifesto to his Fianna Fáil colleagues backing up his bid. The veteran politician said if he were elected he would introduce meaningful reform to the Oireachtas. He said all committee chairs would be elected on the d’Hondt system, which allots positions in descending order, based on the strength of the party.

Mr Gallagher said he would also introduce a “presidents’ meeting” each week where the leaders of the parties, rather than the whips, came together to decide the agenda for the following week. He told his colleagues he would ensure Friday sittings discussed substantive issues, and that topical issues would not occur unless the line minister was present.

Fianna Fáil will meet again on Monday and hold a vote on who will be its candidate.

Labour TD Brendan Howlin has ruled himself out of the equation and confirmed the party would not be proposing anyone for the position.

Sinn Féin president Gerry Adams proposed Mr Ó Caoláin for the role. Mr Ó Caoláin said he would seek to “uphold the highest standards of fairness and impartiality and the proud esteem in which the position is held”.

The Cavan-Monaghan TD added: “I will be canvassing for support from all sides of the house, old colleagues and adversaries and new members alike. I very respectfully ask all Dáil deputies to consider my candidature.”

Nomination forms will have to have the supporting signatures of at least seven other TDs and TDs can only nominate one candidate.