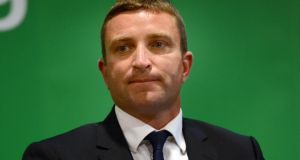 Niall Collins: “While I welcome the report’s publication, it is regrettable Minister Fitzgerald delayed its release until after the Dáil rose for the summer recess.” Photograph: Brenda Fitzsimons/The Irish Times

Fianna Fáil spokesman on justice Niall Collins has described the Department of Justice report as “damning’’ and said it showed how “dysfunctional” departmental administration had become.

The report could not be looked on in isolation, given that there had already been the Cooke and Guerin reports which led to the Fennelly inquiry.

“There are still many questions unanswered,” Mr Collins said “While Brian Purcell is now leaving the department to work somewhere else, the public is still unaware of what was said between Mr Purcell and the Taoiseach the night before former Garda commissioner Martin Callinan resigned his post.”

Mr Collins said it had also been reported that former minister for justice Alan Shatter had written to the Taoiseach outlining his concerns about information he did not receive on the allegations made by whistleblower Maurice McCabe. “This also needs to be clarified by Minister Fitzgerald, ” he added.

He added: “While I welcome the report’s publication, it is regrettable Minister Fitzgerald delayed its release until after the Dáil rose for the summer recess.”

Mr Collins said that while he had sympathy for the department’s hard-working staff, and he accepted the report outlined the good work being done over many years, it did, however, make depressing reading in outlining the weaknesses, in particular of the management advisory committee.

Sinn Féin spokesman on justice Pádraig Mac Lochlainn said the Government could not shirk its responsibility for the department’s serious failings. The report highlighted what was already known about the “closed and secretive” culture within the department.

“However, we also know that the political management of the department by those democratically elected by the people was an absolute shambles,” Mr Mac Lochlainn added. “This is shown by the startling revelation that former justice minister Alan Shatter, who was in office for over three years, did not meet with the chief inspector of the Garda Inspectorate Bob Olson. ’’

He said the report, unfortunately, had not clarified what happened on “the now infamous night” when Brian Purcell was dispatched by his political masters to the house of Martin Callinan, clearly leading to his resignation. “So what we have had since then is a situation where the minister himself and the secretary general have had to move aside,” Mr Mac Lochlainn added. “We need the Taoiseach to urgently clarify what the message was that night. We need answers.”

Fine Gael TD David Stanton, chairman of the Oireachtas justice committee, said the report had found a number of serious problems and issues relating to the administration of the department. He would be proposing that the committee meet at an early date to consider the findings.