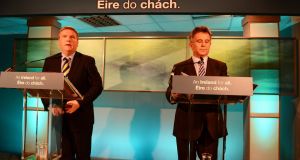 Defending his party’s position Fianna Fáil Public Expenditure and Reform spokesman Sean Fleming said Tuesday that Finance Michael Noonan had himself said it would not be wise to give a figure as it would give away the Government’s negotiating position. .Photograph: Cyril Byrne / The Irish Times

Fianna Fail has confirmed that it has not made provision in its election manifesto for a public service pay increase following the expiry of the Lansdowne Road Agreement.

Fine Gael has accused its main rival of having a black hole in its figures due to the absence of any provision on the public service pay when the current agreement runs out.

Defending his party’s position Fianna Fáil Public Expenditure and Reform spokesman Sean Fleming said Tuesday that Finance Michael Noonan had himself said it would not be wise to give a figure as it would give away the Government’s negotiating position.

“It is bizarre than Michael Noonan would now seek to criticise Fianna Fáil for not stating at this point by how much public sector will change in 2019. In fact his colleague Brendan Howlin fails to make any specific commitment on public sector pay.”

Mr Fleming also pointed to Labour’s manifesto which states that they will negotiate a new public sector pay deal in 2018, in advance of the conclusion of the Lansdowne Road Agreement to deal with remaining unresolved issues arising from the financial emergency legislation.

Mr Fleming committed Fianna Fail to the repeal the Financial Emergency Measures in the Public Interest Acts over the next two years and return to normal industrial relations mechanisms, in relation to setting pay and conditions.

Mr Fleming said that once the emergency measures were repealed Fianna Fail in government would negotiate with the public service unions about future pay increases.

It would cost the exchequer almost €2 billion if the public service pay cuts were restored.

The Fine Gael manifesto sets aside €1.12 billion for “other” purposes “including pay and pensions post-Lansdowne Road agreement” in its €10.1 billion plan.

Although the Fianna Fáil manifesto sets out principles to be followed in any future public pay negotiation, there is no allocation for pay beyond Lansdowne Road commitments in the €8.36 billion it has already set aside from its €8.6 billion plan.