McPhillips claims seat lost by the SDLP to Sinn Féin 2011 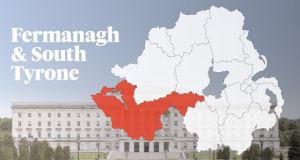 In a significant development, Richie McPhillips has won a seat for the SDLP in Fermanagh and South Tyrone, reclaiming the seat lost to Sinn Féin in 2011.

The battle for the final seat was between John Feely and Seán Lynch of Sinn Féin, with Mr Lynch just edging ahead and securing it in the seventh, and final count.

DUP leader Arlene Foster, her colleague Lord Maurice Morrow and Sinn Féin’s Michelle Gildernew have all been elected as well as the UUP’s Rosemary Barton.

Speaking at the Belfast count centre on Friday night, Ms Foster said it had been “a very good day for the party” and that she was “absolutely elated”.

“We had set out out or five point plan very early on for a stronger, safer Northern Ireland and I think that resonated very strongly with the people.

“When I travelled across Northern Ireland people were engaging in the plan, wanting to ask about education, the economy, so, while the media said it was a lacklustre campaign we were finding people were very engaged with what we were saying to them and this has shown out in what we have been able to achieve today.”

The constituency features two of the DUP’s and Sinn Féin’s most popular women politicians – Ms Foster, the First Minister, and Michelle Gildernew.

However, that didn’t prevent the turnout on Thursday dropping from the last Assembly election – coming in at 64.55 per cent, down from almost 69 per cent in 2011.