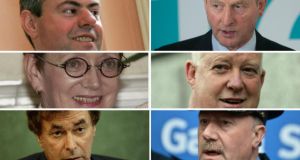 Mr Kenny has been a Fine Gael TD for Mayo since 1975 and Taoiseach since 2011. He has said he first became aware of the issue of the taping of phone calls at Garda stations when told by Attorney General Máire Whelan on Sunday, March 23rd, 2014.

When he became aware of the situation he consulted a close group of advisers before deciding a course of action before that Tuesday’s cabinet meeting. The outcome of this would be the establishment of a Commission of Investigation, the Fennelly Commission.

The evening before the Cabinet meeting, the Taoiseach decided to detail Brian Purcell, secretary general of the Department of Justice, to tell Martin Callinan of the concerns at Government about these developments.

The Taoiseach has always insisted he did not sack the then Garda commissioner but wanted the seriousness of the situation conveyed by Mr Purcell.

Mr Fraser is the secretary general at the Department of the Taoiseach and the most senior civil servant in the country. He was appointed to the position following the retirement of Dermot McCarthy in the months after Fine Gael and Labour assumed office in 2011.

Mr Fraser is one of Mr Kenny’s key advisers and was one of a handful of people present in Government Buildings on the weekend when the Taoiseach became aware of the taping of phone calls at Garda stations.

Mr Purcell was promoted to the position of secretary general at the Department of Justice on the same day Mr Fraser was given the role of secretary to the government. He was sent by the Taoiseach to Mr Callinan’s home to convey the seriousness of the Garda taping issue to the then Garda commissioner.

He previously held the position of director general of the Irish Prison Service and also worked in the Department of Social Welfare, where he decided to stop dole payments to Martin ‘The General’ Cahill.

As a result, he was abducted and shot twice in the legs. He moved from his position in the Department of Justice following the publication of the Toland Report last year. The report found “a “closed, secretive, silo-driven culture” at the department with “significant leadership and management problems”.

Mr Purcell moved to a different position within the public sector and is now head of compliance with the Health Service Executive (HSE).

Máire Whelan SC is the Attorney General. A Labour Party appointee, she is the first woman to hold the position of Attorney General, which she has held for the duration of this Government’s term in office.

At the time of her appointment in 2011, she was Labour’s financial secretary and a member of the party for 30 years. The Attorney General’s office became aware of the taping of phone calls at Garda stations as a result of Ian Bailey’s case against An Garda Síochána and the State.

She brought it to the Taoiseach’s attention as part of a regular update provided to Mr Kenny.

Mr Callinan was Garda commissioner from December 2010 to March 2014, when he announced his retirement the morning after Mr Purcell called to his home. He had already been under significant political pressure for a number of weeks prior to his resignation, primarily because of his handling of issues surrounding Garda whistleblowers.

At a meeting of the Public Accounts Committee (PAC), he called the actions of the whistleblowers “disgusting”. Then minister for transport Leo Varadkar upped the pressure on Mr Callinan when he described their actions as “distinguished”.

Mr Shatter, a Fine Gael TD for Dublin South, was minister for justice between March 2011 and May 2014, when he resigned following the publication of the Guerin Report into the handling of allegations made by Garda whistleblower Maurice McCabe. Mr Shatter is contesting the findings of the Guerin Report.

He had also been involved in a number of controversies during the first months of 2014, such as the Garda whistleblowers, the alleged bugging of the offices of the Garda Síochána Ombudsman Commission (GSOC) and the taping of phone calls at Garda stations.

Previously seen as a staunch ally of the Taoiseach, he has been critical of some aspects of Coalition justice policy since his resignation.