Fennelly report: Martin to consider motion of no confidence in Kenny 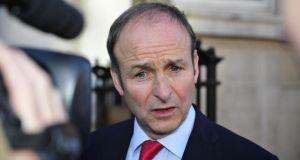 Fianna Fáil leader Micheál Martin: “It was very wrong for the Taoiseach to do what he did. Martin Callinan was left with no option.” Photograph: Aidan Crawley

Fianna Fáil leader Micheál Martin is to consider tabling a motion of no confidence in Taoiseach Enda Kenny.

He said the findings were extremely serious, and proved that the former Garda commissioner Martin Callinan was sacked.

Mr Martin said: “It was very wrong for the Taoiseach to do what he did. Martin Callinan was left with no option.

“There is a need now for the Government to apologise to Mr Callinan on this specific issue and how he was treated.

“Irrespective on views on other issues, on this specific issue he was wronged in my view and undue pressure was put on him.”

The report finds that the immediate and direct cause of Mr Callinan’s decision to retire was the visit from the secretary general of the Department of Justice Brian Purcell and the message he conveyed from Mr Kenny.

It adds that it was the decision of the commissioner to retire, and it finds Mr Kenny did not sack or seek to sack Mr Callinan.

The leader of the main opposition party said there were also serious questions for attorney general Máire Whelan to answer.

Former minister for justice Alan Shatter, who resigned his position in May 2014, welcomed the conclusions of the inquiry.

The report found he was unaware of the recording of telephone calls in and out of Garda stations until a meeting on March 23th, 2014.

This is despite the attorney general, the Garda commissioner and Mr Purcell being aware of it for some time.

Mr Shatter said there were a number of key lessons to be learned from the report.

In a direct criticism of the Taoiseach and the attorney general, the former minister said there should “always be the fullest communication and co-operation between colleagues in government on issues of public importance”.

The Dublin South TD also criticised Mr Purcell, who was his secretary general, for not relaying all crucial information to him.

Sinn Féin TD Aengus Ó Snodaigh said the Taoiseach and the attorney general both needed to consider their positions.

He said the “orders” Mr Kenny had given Mr Purcell had the obvious impact that Mr Callinan believed he should resign.

“The conflicting evidence contained in the Fennelly report is extraordinary and raises questions as to why the Taoiseach felt the need to send Mr Purcell on the Government’s behalf in the manner in which he did, rather than waiting until the following morning’s Cabinet meeting to discuss Commissioner Callinan’s position?”