Exclusion of Protestant youth in Belfast ‘of great concern’ 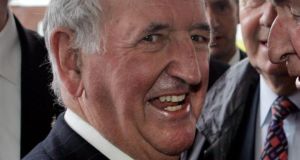 Sir Ken Bloomfield told the Merriman Summer School in Co Clare he foresaw significant change in the years ahead, but warned that of all the flaws of the current political dispensation, the position of young Protestants in parts of Belfast was most worrisome. Photograph: Matt Kavanagh/The Irish Times

The complete disengagement of the young Protestant working class in loyalist west Belfast is a cause for great concern, the former cabinet secretary to the failed 1974 power-sharing executive in Stormont has said.

Sir Ken Bloomfield told the Merriman Summer School in Co Clare he foresaw significant change in the years ahead, but warned that of all the flaws of the current political dispensation, the position of young Protestants in parts of Belfast was most worrisome.

Speaking on the theme “A Possible Ireland Beyond My Time”, he said the future should be seen in the context of a changing Ireland and a changing UK.

Referring to a Border poll, he said: “Those asked to vote for an exit from the United Kingdom should know what they are getting into, and the people in the present Republic should also understand the consequences for them.

“We should focus on present realities and challenges, rather than on future visions and possibilities.”

He said he spoke as a British subject and an Irishman.

“Let no man tell me I cannot be both,” he warned. “I see no conflict between my place as a member of the European Community, my citizenship in the United Kingdom and my love for Ireland, without regard to politics or religion.”

He said he expected the push for Scottish independence to fail, but added that such a poll result could lead to a so-called “devolution-plus” arrangement with the rest of the UK.

“When, as I foresee, the people of Scotland reject independence, will they burn the Saltire and lose their sense of identity? As Ian Paisley was wont to say in his less affable days, ‘Never, never, never’.”

“Territorial borders work to separate the ‘we’ inside from the ‘they’ beyond, to homogenise the territories they circumscribe, to naturalise existing territorial divisions of power and to make man-made territories seem like eternal features of the natural landscape,” he said.

“Those forces are most powerful when they are invisibly, relentlessly reproduced in everyday discourses.”

He referred to the striking persistence of identification with the island as a whole that persists south of the Border.

“This ‘banal’ or everyday nationalism of the Irish State provides a generally sympathetic environment for projects of all kinds that transcend the Border. In particular, it ensures that a reasonably strong foundation remains for a public discourse and a politics that deals with all of Ireland and that stretches across the Border between the two jurisdictions.”