Everything you need to know about the penalty points issue

Loopholes in law led to question mark over 200,000 points issued since August 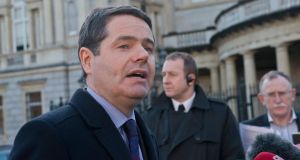 Two errors in the Road Traffic Act 2014 have emerged which have placed a question mark over the 200,000 penalty points issued to 78,000 drivers since August.

What are the errors?

The first is a flaw in the wording of the Act which means there appears to be uncertainty about all points issued since August because the power to add points to licences was effectively removed. Basically, the Road Traffic Act 2014, introduced in the summer, should have made reference to the 2002 Act, which was previously the means of endorsing penalty points, but it did not. Minister for Transport Paschal Donohoe described this as a “legislative error”.

The second is that a couple of new penalty point offences - using a vehicle without a valid NCT certificate and parking in a dangerous position - were not technically in force because earlier legislation excluding them from a list of penalty point offences was not changed. Mr Donohoe said this was an “oversight”.

Does that mean points will disappear?

Well, it’s unlikely to be that simple. With the Dáil set to go into recess on Thursday, Mr Donohoe intends to rush emergency legislation through the Oireachtas next week. His hope is that this retrospective legislation will quickly close off the loopholes that have been identified and eliminate a rush in drivers lodging legal cases.

So what is all the fuss about?

Aside from being embarrassing for the Minister there are two groups who may still seek to take a challenge. The first are the estimated 49 people who have lost their licences since August after accruing enough points to take them over the limit.

Secondly, there is a group of drivers who received but did not accept points issued since the summer. If they object to the points these drivers will ultimately end up in court where they may seek to contest the application of points under the flawed legislation.

Isn’t this whole penalty points system a bit of a mess?

The latest development follows an awful lot of bad press for the penalty points system. An Garda Síochána has been rocked by a series of scandals since Garda whistleblowers John Wilson and Sergeant Maurice McCabe first made claims about the practice of gardaí terminating points.

Minister for Justice Frances Fitzgerald has said that we are now in an era of transparency for penalty points. Ms Fitzgerald said she and the new Garda Commissioner Noirin O’Sullivan are determined that anybody who does not behave properly on penalty points will be held to account.

How bad is this for Mr Donohue?

His Opposition counterparts are taking the development seriously. Fianna Fail’s Timmy Dooley said he would support the Minister’s efforts to rectify the situation but proclaimed himself very concerned about the potential for legal challenge. Sinn Féin’s Dessie Ellis and Independent TD Mick Wallace also expressed concerns. The Minister said he took full responsibility for what had happened.

Retrospective legislation can be fraught with difficulty. One example cited by the Ombudsman was the Health (Amendment) (No. 2) Bill 2004. In a 2010 investigation into the right to nursing home care, the Ombudsman said the Bill purported to provide a retrospective legal basis for the charging of medical card holders, over a period of almost 30 years, for the provision of in-patient services in public nursing homes. It also sought to provide a legal basis for such charges in the future. “In its judgment the Supreme Court found that the retrospective provisions of the Bill were unconstitutional,” the report stated.