European funding for banks could be ‘invaluable’ to recovery, says IMF 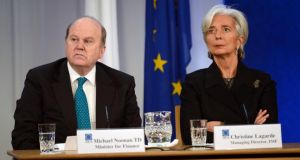 The recapitalisation of Ireland’s banks by the European Stability Mechanism (ESM), Europe’s permanent bank bailout fund, “could play an invaluable role” in the recovery of the economy, according to a new report from the International Monetary Fund.

The numbers “underemployed” in the Irish economy now stands at 23 per cent, which the IMF describes as “staggering”.

The report warned that the prospects for Irish economic recovery remain highly uncertain over the medium term. Because of this, Ireland cannot be assured of staying free of dependence on the EU-IMF loans, it said.

The Government has achieved strong policy implementation of the bailout programme so far, the report stated, and the fund acknowledged the State’s success in raising money from private investors in the bond market.

But the report also noted high public and private debt and problems in the banking sector, which include low levels of bank lending as significant obstacles to recovery.

“Continued weak growth would likely erode confidence and potentially undermine market access as a recovery is critical to putting Ireland’s debt on a downward path.”

’s parallel quarterly report, leaked details of which were published by the Irish Times yesterday.

The IMF report echoes the EU Commission’s which criticised overspending on health expenditure and warned of problems associated with high levels of unemployment and rising numbers of non-performing loans.

Referring to inadequate progress by banks in tackling problem mortgages, the IMF argued that a sharp improvement is needed in dealing with non-performing loans.

It says if the economy were to grow by half a per cent in coming years, “Ireland’s debt ratio would continue to rise, reaching some 134 per cent of gross domestic product by 2018. Debt levels above 120 per cent of GDP are viewed by economists as putting a government at risk of default. Moreover, higher loan losses associated with rising unemployment and weaker asset prices would generate new capital needs once banks’ buffers are exhausted, which could further raise debt ratios in the medium term.

“Were such a scenario to arise, Ireland’s ability to rely fully on the market to cover its large-post programme financing needs could easily become strained.”

The report suggested those risks could be mitigated if support was received from the ESM to recapitalise Irish banks retrospectively.

The report rules out general debt relief for distressed mortgages on the basis it would be “unaffordable and ill-targeted as 84 per cent of mortgages [of principal homes] are not in arrears even though many of these are in negative equity”.

When the numbers of unemployed people are added to involuntary part-time workers and those in marginal jobs, the rate of unemployment and underemployment rises to a “staggering 23 per cent”.

Separate figures published by the Department of Finance show tax receipts and public spending in the first three months of the year were in line with targets in last December’s budget. A continued narrowing of the deficit ensured the quarterly EU-IMF budgetary target was also met.