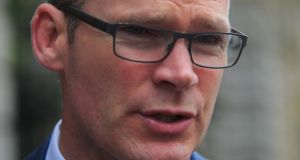 Minister for Housing Simon Coveney said the European Commission had been consistent on its position on water charges. Photograph: Gareth Chaney/Collins

The European Commission has stressed a derogation offered to Ireland in relation to water charges has ended.

Mr Coveney said the commission had been consistent on its position and it articulated that view clearly on Friday.

“The commission’s job is to ensure every country is treated equally in terms of their obligations and the commitments in the Water Framework Directive,” he said.

“But I spent a lot of time explaining that Ireland was in a process here and part of that process was to outline our international and national obligations and to make recommendations that are consistent with those.

“The expert commission needs the space to do that. They listened and understood the place we were coming from, but I don’t want to put words into their mouths.”

Mr Coveney said the commission outlined in “very clear terms” that the derogation offered to Ireland had expired. He said it was their position that water charges were required in some form in order for Ireland to fulfil its obligations under the directive.

The commission is expected to give the Government some space but not an endless amount of time. It is understood it believes suspension of charges breaches the directive and it could move to enforcement proceedings in the future.

He said that view had been shared with Sinn Féin MEP Lynn Boylan and Independent MEP Marian Harkin and was articulated again on Friday.

The commissioner is expected to give a formal response to Mr Coveney next week.