Involvement of IMF, establishment of €50bn fund were ‘main sticking points’ of discussion 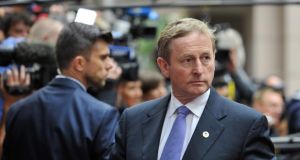 Taoiseach Enda Kenny arrives for a meeting in Brussels of the leaders of the 19 countries that use the euro currency, on July 12th, 2015. Photograph: Jean-Christophe Verhaegen/AFP/Getty Images

Speaking after the meeting of euro zone leaders in Brussels on Monday, Taoiseach Enda Kenny said that the negotiations had been “bruising” but he welcomed that the basis for a third agreement had been reached.

“This has been a pretty bruising experience over the last period, but what it has allowed for is the basis for a third agreement for Greece which will allow for the Greek economy to thrive and prosper and continue to remain a member for the euro zone,” he said.

He said that the involvement of the International Monetary Fund (IMF) in a programme and the establishment of a €50 billion fund had been the main sticking points during the discussion.

25 per cent of the proceeds of the fund will be used for investment, with the remainder used for debt reduction, he said.

“It is hoped that this now can go through the Greek parliament with assistance from all sides and will form the basis of a third programme.”

Yesterday, Irish officials said the Government’s “red lines” throughout the talks were that Greece should stay in the euro but not receive any debt write downs, although it favours debt reprofiling, such as extending loan maturities.

Sources said the approach of Minister for Finance Michael Noonan in recent days was in part influenced by concerns for the long-term viability of the currency union.

An exit by one country now could create a precedent for the medium and longer term: that countries in difficulty could leave the euro.

Prior to the announcement of the agreement, Mr Kenny said: “It is important to keep in mind what Europe and the euro zone is about. We don’t want to look back in 10 years’ time and have a situation where this could have been saved but wasn’t.”

However, both Mr Kenny and Mr Noonan struck a similar note to other European leaders by saying the Greek government could build up trust with other countries by voting some measures through its parliament.

Over the weekend meetings, the Irish Government was not aligned with a camp of countries which were open to the option of a Greek exit from the euro nor a cluster of states advocating for Greece, officials said.

While France and Italy were the main countries advocating for Greece within the euro group, a cluster of countries – including Finland, Slovakia, Slovenia and Spain – were open to a Grexit.

Mr Noonan, along with his German counterpart Wolfgang Schäuble, was said to have attempted to keep discussions going at fraught times during Saturday evening’s meeting of euro zone finance ministers.

Sources said that the pair intervened after a group of ministers suggested there was no point in continuing because of the lack of trust in the Greek government.